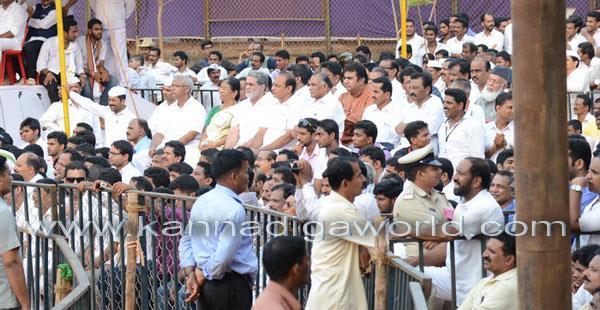 Image from Post Regarding Mangalore can be developed with youth empowerment: Rahul Gandhi

Mangalore can be developed with youth empowerment: Rahul Gandhi

Mangalore, April 4: AICC vice-president Rahul Gandhi said that Congress is not a party, but one thought.

Speaking at the massive Congress rally at Nehru Maidan on April 4, Friday, he said that Congress has reserved 50 percent seats for woman in local bodies and committed 33 percent reservation in state legislatures and Lok Sabha.

He said that the UPA government has passed Lokpal Bill and stressed that the party’s commitment to pass the five remaining anti-graft legislations which remain stalled in Parliament.

Mr Gandhi said that Congress is working for fostering unity and brotherhood among people in society. During the Congress government, the road construction is three times more than BJP rule.

In the coming days, Mangalore too will be developed just like Bangalore. Mangalore must be strengthened in Informational Technology, Bio Technology and this can be done easily since there are many capable youths in the city. Bangalore and Mangalore will become world famous like USA and UK.

Delivering the welcome address, Dr Parameshwar said that BJP has no moral right to speak on corruption when it has leaders like B S Yeddyurappa and Ananth Kumar.

He also urged the people to vote for Congress and for its Lok Sabha candidate Janardhana Poojary to save the democracy.

The rally began from Rosario church via Rao and Rao circle and then entered Nehru Maidan.

Mangalore will be known to foreigners, we will make that happen: Rahul Gandhi

Mangalore, April 4: “Mangaloreans are well educated, they have potential and capability. Mangalore will be known throughout the world just as Bangalore and that can happen with Congress and your support, said Rahul Gandhi to the gathered Mangaloreans.

Many congress leaders had appeared to great Rahul and promote congress, Speaking to the members gathered, Congress leader said that Development means providing shelter and food twice a day to people in the country, BharatiyaJanata Party and its PM candidate Modi were taunted, they criticized Modi Govt. of Gujarath that 60% of Small scale industries have been shut down, children and women are suffering from malnutrition, how will such kind of person lead our country, they questioned.

Chief Minisiter of Karnataka, Siddharamayya addressed the gathering saying that, Modi is a hard core RSS member, so BJP wants him to be the PM, they are communalists, we won’t let Modi become the PM. People say there is Modi effect, but it is not true. BJP has no ethical values he added.

Rahul Gandi started his speech by attacking the BJP, he said, “Several Congress governments came to power in Karnataka, and each government has something positive to give. And when Karnataka became strong, BJP came. They too had something to give, in terms of setting record for corruption. With Yeddyurappa, for the first time a CM went to jail. They go to Madhya Pradesh known for mining mafia and then Chhattisgarh which has sand and mining mafia, and then to Gujarat where two-three ministers have gone to jail. But they see corruption only in Congress-ruled states.”

Congress is not a party, it is a thought, an ideology where all are considered equals and all coexist peacefully. Only then can progress be possible. A principle cannot be defeated,” he said.

Speaking on development, he said, “In the last 10 years we have achieved lot of progress. We have built three times more roads then the BJP. We have opened colleges and universities and strived for inclusive growth. Development is not only about the rich, where the poor are left behind neglected. We brought in MNREGA, food security for every person, RTI where you can ask any question and know what is happening in the government, and the Lokpal Bill which the BJP tried to stop. We proposed reservation of 33 percent for women in the parliament, but BJP opposed it. We have given 50 percent reservation for women in our panchayats. If we come to power again, we will give 33 percent reservation for women in the parliament.

He said, primaries were introduced by the Congress this time, “Earlier, just two-three people would choose the candidate, but for the first time we asked our Congress units at the local levels who they want as their candidates, and thus we gave you JanardhanPoojary. So you have to support him andmake him win.”

In final appeal, he said, “If Congress come to power at the centre, Karnataka will develop at a fast pace. Women and youth will get empowerment and we will bring Karnataka back on the track of development.”

G. Parameshwar addressed and welcomed Rahul Gandhi, other congress leaders and the gathering. He started his address speech saying that Rahul Gandhi has come to Mangalore to ask vote for JanardhanaPoojari, he continued by saying that congress has increased the education level from 15% to 75% and also kept forward acheivements done by congress.

Prior to the event a Congress rally led by JanardhanPoojary was taken out from the party office to Nehru Maidan.

Congress leaders, RamanathRai, Oscar Fernandes, Shanta Ram Nayak, JanardhanaPoojari and others were present on the stage.