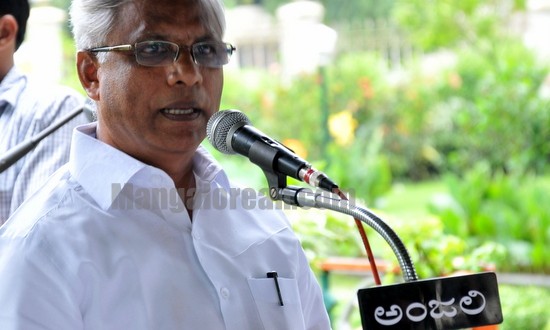 The District Congress staged a dharna in front of the Gandhi Statue against the bursting of fire crackers on U R Ananthamurthy’s death, at the Gandhi park here on August 25.

Prior to the Dharna Congress leaders garlanded the portrait of Gandhiji and U R Ananthamurthy.

He further said that when U R Ananthamurthy died, the Bajrang Dal activists burst fire crackers in Carstreet, Bendur andMallikatta. It is a shameful act and we the congress party workers apologize with the people of the country for the inhumane act done by the Hindu organization.  If the BJP is condemning the inhuman act done by Bajrang Dal, let the BJP get down to the streets and demand for the arrest of all the activists who were involved in the heinous act.  BJP is showing fake patriotism and trying to divide the country in the name of religion. BJP is producing terrorists and BJP leaders do not have love towards the nation.

Home minister and Chief minister has already instructed to take strict action against the culprits who were rejoicing over U R Ananthamurthy’s death. If the BJP will not take any action, we will see that the wrong doings by the Hindu organization with the support of the BJP will reach the gram panchayat level so that all the people will know what the BJP is.

MLA J R Lobo speaking on the occasion said that, Late U R Ananthamurthy did not belong to any party. He was a famous writer and Jnanpith awardee, through his writings he had expressed his views on superstitious beliefs and he has worked for the betterment of the people. Through his writings he has become internationally popular. His death is a great loss to the state literary world and the Chief minister described him as “An Ocean of thoughts”.

Lobo further said that if a person dies, people go and meet the family and console them, even if the enemy die also people show sympathy, but when U R Ananthamurthy died, the Bajrang Dal activists burst fire crackers and rejoiced over his death which is a shameful act for the district and the entire country because Mangalore is known as a intellectuals city. This is the first time in the history of our country that some people have rejoiced over someone’s death.  If the people have real love towards the country and have the patriotic spirit, let them come out by forgetting the party differences and raise their voice against such a heinous crime.  This act is not only a insult to Late U R Ananthamurthy but it is an insult for the entire country.