Home » Daijiworld » Mangalore: Annual Karavali Utsav gets off to a colourful start 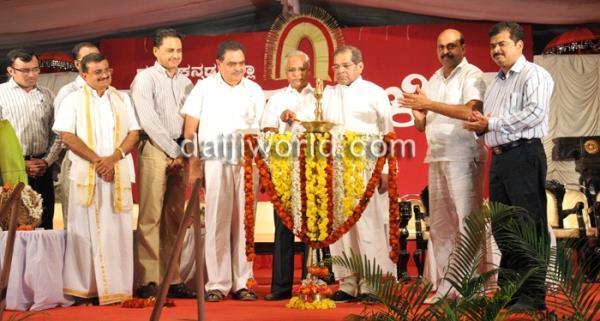 Mangalore: Annual Karavali Utsav gets off to a colourful start

Mangalore, Jan 13: Karavali Utsav, the annual fair in the city that attracts people from all over the coastal region, got off to a colourful start on Sunday January 12.

Delivering the presidential address, MLA J R Lobo said, “Our coastal area is known for its culture, tradition, economy and education. Hence, to preserve our culture and heritage, Karavali Utsav is essential.

“Karavali Utsav should be celebrated on grand scale like the Goa Carnival and Gujarat Kite Festival,” he suggested.

Former principal of St Aloysius College and writer Fr Prashant Madtha inaugurated the formal stage programme. In his address he said, “We should all be united and not divided. Mangalore is a unique place which has nine languages like Tulu, Kannada, Konkani, English, Beary and others. To communicate among themselves, people here switch on to different languages, for example the bus conductor who calls out to passengers in various languages. Hence Mangalore should hold a place of pride in us.”

He further added, “People of this region accept everything that is important to them. After Netravati railway bridge came into existence in 1906, people from Kerala and other places came here to study. We should be happy about it. Democracy means growing. There is a bit of unrest now but we need to work to pick the broken glass pieces before they wound our legs.”

District incharge and minister for forests and ecology Ramanath Rai inauguated the exhbition.

Addressing the gathering, Rai said, “Mangalore is the melting pot of education, economy, tradition and culture. Students from various places come here for education, from primary to postgraduation. Mangalore is famous for its folk traditions like Kambala, and at the same time it is good place for industry as well as NRI investment.

“Just as we celebrate religious festivals on particular days of the year, we have planned to schedule Karavali Utsav on the last Friday of December from next year, ” he said.

The Karavali Utsav will be open for 45 days. Apart from offering lots of choices for the shoppers, it includes amusement rides and cultural and entertainment programmes. The entrance to the venue, which is different and unique each year, wears a traditional look this time.