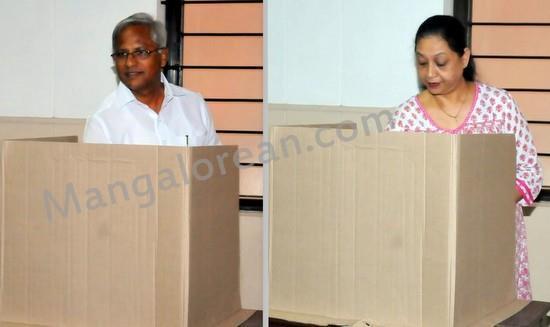 Image from Post Regarding 68-year-old: woman collapses and Dies after Voting at Vamanjoor

Mangalore: 68-year-old: woman collapses and Dies after Voting at Vamanjoor

UPDATE (2:30 pm) SP Sharana Basappa speaking to the mediapersons said that the polling is going on peacefully. Naravi Beltangagy taluk has witnessed 59% polling so far. There are no any untoward incidents reported so far. He further said that we have posted paramilitary forces in the naxal affected areas.

ANF inspector Radhakrishnan said that 24 booths in Karkala and Beltangady which are naxal affected have been inspected through the mobile teams.

In Hosmar Idu booth no 171 the poll officer said that, no proper food and accommodation was provided. The polling staff had to bring food from the hotel far away from the polling booth, they had to spend the night in the house of a local who was kind enough to accommodate them. There is no electricity in the area except in the booth

UPDATE (11:50 am) Vagga polling booth election officer complained that they are facing problems as there is no proper toilet facility for women, there are three women sent for election duty here, she said.

After casting his vote Nalin Kumar Kateel said, “I came to Lady Hill school to cast my vote along with my wife. There is a huge response from the people in the district. BJP will win the elections and Modi will be the next prime minister. The opposition party is trying to create confusion in the minds of the people to get vote bank by defaming me. I have filed a complaint with the Election commission. It is my legal fight and whoever is involved in this conspiracy should be severely punished”.

After casting his vote, Bishop Dr Aloysius D’Souza speaking to mangalorean.com said, “It is very surprising to see the enthusiasm in people to cast their vote. There is a huge response from the people and they have reached the polling booth early in the morning”. He further said that this time the election will be very competetive. We pray that the people elect a able candidate and help to form a good government which can respect people without discrimination of caste, creed and religion. The government which can take care of the people of all walks of life and allow them to lead a respectful life.

Mangalore South MLA J R Lobo cast his vote at the St Sebastian school, Bendur. After casting his vote Lobo speaking to the mediapersons said, “This election is a very important one to the country. Keeping in mind the development of the country people should elect a able leader. People of the Mangalore South Constituency had supported me a lot and elected me, I am sure this time they will vote for congress candidate and elect him as our MP”.

According to sources, at Vamanjoor a 68-year-old woman after casting her vote collapsed and breathed her last. The deceased has been identified as Gangu, wife of Krishnappa Poojary, a resident of Moodshedde.

Elections are held to the Lok Sabha in all the 5 constituencies.