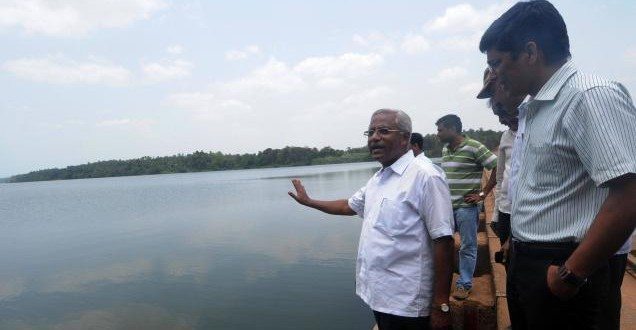 Expresses concern at the slow progress of work

Expressing concern over delay in the completing of new vented dam across the Netravathi at Thumbe, Mangalore City South MLA J.R. Lobo said on Friday that a decision on whether to terminate the contract of the contractor or not will be taken after the government appoints the district in-charge minister.

The new and bigger dam is coming up downstream to store more drinking water for the city.

Addressing presspersons after conducting a meeting with officials at Thumbe, Mr. Lobo said that construction of the new dam, which began two years ago, should have been completed by now. Once the government appointed the minister in-charge of the district, a meeting of officials of Karnataka Urban Water Supply and Drainage Board (KUWSDB), Mangalore City Corporation and elected representatives would be conducted with the contractor.

Meanwhile, according to an Assistant Executive Engineer of the board, 40 per cent of the dam work had been completed with 12 of the 29 pillars erected. Foundation for 13 of the remaining 17 pillars was laid.

The engineer said the dam would be built at an estimated cost of Rs. 75.5 crore. Of that, the government had released Rs. 19.7 crore and out of which Rs. 15.5 crore had been paid to the contractor.

Mr. Lobo, a former Commissioner of the city corporation, told presspersons that water supply to some areas like Surathkal, Panambur and Pandeshwar had been disrupted for the past three days as only one of the three pumps was functional at Thumb. The pumps were expected to be repaired by Friday evening and water supply restored on Saturday.