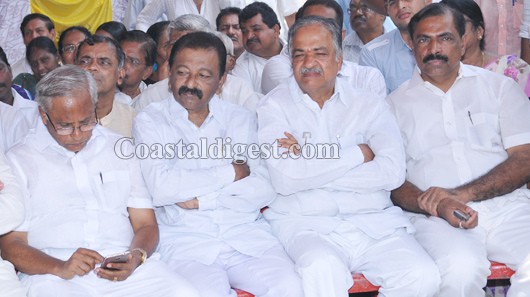 Mangaluru, Mar 11: A day after the Lok Sabha passed the Right to Fair Compensation and Transparency in Land Acquisition, Rehabilitation and Resettlement (Amendment) Bill, 2015, popularly known as the land acquisition bill, several leaders and members of Dakshina Kannada District Congress Committee staged a demonstration against the passage of the bill, in front of the deputy commissioner’s office here on Wednesday.

Programmes should be brought by the ruling government that will uplift or benefit the weak, backward and oppressed communities. The present union government is trying to mislead the people and discredit the UPA government over issues such as Adhaar scheme and areca ban. Currently, this government is looking to serve the corporate world by bringing the land acquisition bill through an ordinance, he said, questioning the necessity of bringing the bill through an ordinance.

Rather than ‘Swacch Bharat’, India should become a country with clean minds, he stressed.

MLC Ivan D’Souza said that the land acquisition bill, once passed, would benefit only the corporate world since industrial projects would be exempt from seeking the required consent of 80 percent of affected persons. These projects will also be exempt from the social impact assessment (SIA) in areas where land will be acquired. Through the proposed legislation, the Modi government is giving opportunity to industries and corporate companies to take away land belonging to farmers without their consent. It is following a Hitler-istic approach by bringing this law through an ordinance instead of tabling it in the Lok Sabha, he said.

Mangaluru South MLA J R Lobo said that the proposed amended land acquisition act intended to establish a system where land could be usurped by corporate companies for their industries without providing sufficient compensation or basic facilities to affected persons.