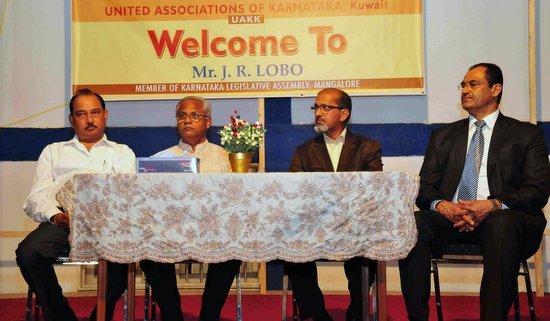 Pascal Pinto and Satishchandra Shetty – prominent NRIs and well known social workers addressed the gathering and thanked AI-Express for the restoration of flight service to Kuwait – Mangalore sector. They requested all CoastalKarnataka NRIs in Kuwait to make use of Air India Express Flights in Kuwait-Mangalore sector.

Chief Guest J R Lobo, in his address gave a call to all Coastal Karnataka NRIs in Kuwait to patronize AI-Express Flight Services to Kuwait – Mangalore sector and help smooth running of the flights. He cautioned saying that this may be a last chance to retain Air India Express flight services to Kuwait – Mangalore sector. He shared his experiences about his recent meetings with State Aviation Minister G M Siddeshwar and Air India Express MD & CEO Rohit Nandan who approved the restoration of AIE express services to this sector.

In an open question and answer session several prominent audience from Coastal Karnataka and Northern parts of Kerala suggested several points to increase the passenger load to Kuwait – Mangalore sector, and also conveyed their concerns while choosing AIE flights for their travel to Kuwait – Mangalore sector. In reply, J R Lobo assured to the audience and leaders of UAKK member associations that he would be their voice and convey their concerns of passengers to Aviation Ministry and Air India Express Management regarding flight timings, hike in fare, luggage, hygiene in the aircraft, improvement in catering facilities and the hospitality of AIE staff etc.

Lobo also assured that he will suggest Karnataka State Government to grant permission to NRI students to appear for CET examination once they complete 12th standard in Kuwait or in other GCCcountries so that the fees structures for NRI students will match with local students.

Fayaz Sheikh coordinated and convened the public meeting and Stephen Machado delivered the vote of thanks.