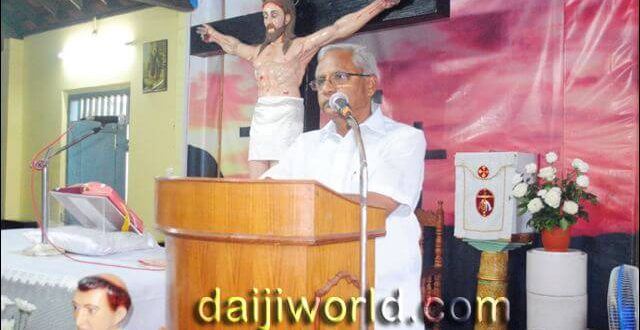 Kundapur, Jun 27: Rajya Sabha member Oscar Fernandes and Mangaluru South MLA J R Lobo visited Kundapur relating to the accident in Movadi Cross near in the morning on June 21 on NH 66 between
a private bus and an Omni van ferrying school children. 8 children had died and 12 people were injured in the accident.

The leaders visited Don Bosco School where the deceased children were studying and spoke to students there. They later participated in the seventh day Mass held at Gangolli Church for late Nikita D’ Silva (13), Ananya D’ Silva (6), Calista (13), Clarissa (6), Alvita Olivera (9), Ancita Olivera (6), Royston(5) and Delvin(5). Oscar’s wife Blossom Fernandes, M A Gafoor, MLC Pratapchandra Shetty, Byndoor MLA Gopala Poojary, Kundapur block Congress president Malyadi Shivarama Shetty, Byndoor block Congress president Ramesh Ganiga and others were present.
Speaking after the Mass, MLA J R Lobo said that it is extremely sad to see that eight children perished in the same accident. “We have to bow to the will of the Almighty. May He provide enough strength to the families to bear the loss and look after the children who have passed away,” he said.

Oscar Fernandes speaking on the occasion said that there will be detailed investigation of the accident. “The government is bound to help the distressed families. The government has thought of taking strict action against vehicles ferrying children beyond the limit.” he said.

Oscar and Lobo who pacified the families assured that the families can contact them in cases of difficulties.