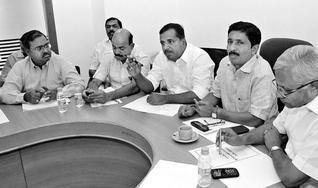 Image from Post Regarding Khader prepares city for monsoon onslaught

With a few days left for the arrival of the monsoon, Minister for Health U.T. Khader has asked the Mangalore City Corporation and the Health Department to gear up tackle communicable diseases. Mangalore is particularly known for the spread of malaria, he pointed out.

Reviewing preparedness along with Principal Secretary to the Department of Health N. Sivasailam, he said on Saturday that 60 sprayers, 49 health workers of the corporation and 25 link workers hired to educate people on health issues should be constituted into teams and deputed to different wards. They should be tasked with carrying spraying of chemicals to prevent spread of diseases twice a month, inspecting vulnerable areas, including slums.

Mr. Khader was surprised that spraying of chemicals on individual premises all over the city had been stopped though it had enough personnel and equipment.

Regretting under-reporting of diseases such as malaria, he said the situation was such that the disease would have spread to many by the time the corporation came to know about it, and a chance to prevent their occurrence is lost. “I will be left with no option but to visit hospitals to see patients,” he said.

He sought quick identification of instances of diseases and quick action. “I do not mind if the number of cases goes up (because of correct reporting),” he said.

Mr. Sivasailam directed Health officials to write to all medical establishments explaining how they were legally bound to report all communicable diseases and that delay of 48 hours in reporting them could lead to legal action against them.

He pointed out that stagnation of water for curing of concrete in buildings under construction was the major cause of spread of diseases in more than 70 per cent of the cases.

That the National Urban Health Mission (NUHM) here is not linked to health indicators was exposed on Saturday by the Principal Secretary to the Health Department, N. Sivasailam.

When a Health Official started to explain the infrastructure to be created under the NUHM, Mr. Sivasailam sought to know the objective of the programmes – such as bringing down infant mortality rate. The official continued to say it was aimed helping the poor and improving their health. An angry Mr. Sivasailam said, “I am not asking you give me your literary expertise, give me statistics.” The official said he was not part of the team that worked out details a year ago. Mr. Sivasailam later said that the NUHM would be tailor-made to different urban centres and linked to health indicators with clearly defined objectives.