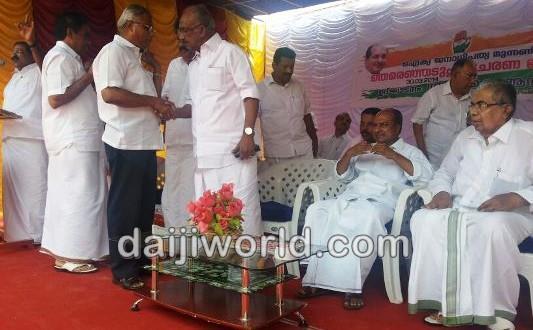 Image from Post Regarding No Modi wave in nation, UPA-3 will come to power – A K Antony

Kasargod: No Modi wave in nation, UPA-3 will come to power – A K Antony

Kasargod, Mar 30: “BJP prime ministerial candidate Narendra Modi’s agenda is harmful to the nation. It will be detrimental to the unity and integrity of the country,” said union defence minister A K Antony.

He was addressing a public gathering in Kasargod here on Sunday March 30 while campaigning in support of United Democratic Front (UDF) candidate Siddique.

“UPA-3 government will come to power this time. The pre-election surveys are all false propaganda – there is no Modi wave in the country. It (Modi wave) is nothing but a propaganda orchestrated by the RSS and the corporates. The election results will prove that the issues being raised now are totally false. No single party will get majority, but the Congress will emerge as the largest party. We will form the goverment for the third successive time with support from regional parties,” he said.

“Our party is united. BJP is struggling with internal conflicts. It has truly become a party with differences. There is no unity in their party. It will drown in its own problems. Election is not a competition between individuals. BJP is our main opponent, and voters should remember that if Congress loses, BJP will come to power,” he added.

Attacking Narendra Modi over the recent AK-47 remark, Antony said, “The morale of the Indian Army has taken a beating because of Narendra Modi’s remark about AK-47. Such statements will help the enemy.”

On Congress’ prospects in Kerala, he said, “UDF led by Congress in Kerala will get majority of seats. People will teach a lesson to the CPI(M) for its violent politics. Most of itsmembers are contesting independently. CPI(M) has fielded candidates who are not its members, which has created dissent among its loyal workers.”

Mangalore MLA J R Lobo also campaign in Kasargod. Along with P B Abdul Razak, Nelson Monteiro, Lawrence and Felix, J R Lobo visited the churches of Manjeshwar, Mariashram and Pavoor. He met people and asked them to cast their votes for Congress. He then visited the election rally addressed by A K Antony.