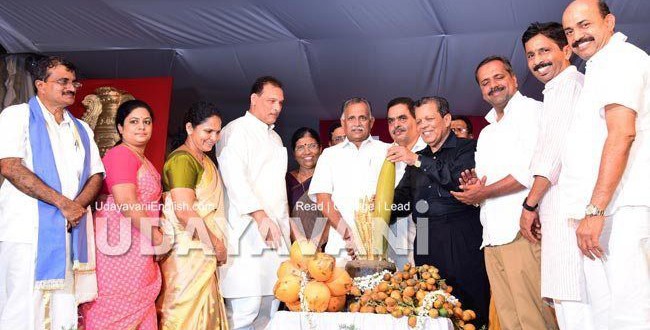 Image from Post Regarding Karavali Utsav gets resplendent start in Mangaluru

Mangaluru : The annual signature event of the coastal belt, ‘Karavali Utsav’, which has grown into a brand by itself over the years, was given a colourful start, on Tuesday December 23, at the Karavali Utsav grounds.

The event comprising of consumer fair, beach festival, quiz competition, cultural events to some fun sports is all set to enthrall the visitors from December 23 to January 1, 2015. The Consumer fair however will be held for 45 days.

Inaugurating the programme, Nitte Institutions Vice-Chancellor N Vinay Hegde gave a clarion call to the political leaders of the region to rise above political differences and work united towards the development of the region.

Delivering his presidential address, Mangaluru South MLA J R Lobo said that the main aim of organizing Karavali Utsav is to attract investment and industries to set up their establishments in the district.

“Dearth of opportunities in our district is forcing the people from this region to migrate to other countries in search of greener pastures. We need to develop the district in such a way that not only the migration stops but people from other districts too come and set up their business here,” Lobo said.

The people of this district should strive to ensure that the district treads the path of development, he added.

The consumer fair was inaugurated by Dakshina Kannada District in-charge Minister and Minister for Forest and Ecology B Ramanath Rai.

Police personnel were deployed along the entire route and vantage points. Traffic diversion were also imposed in various parts of the city in view of the procession.