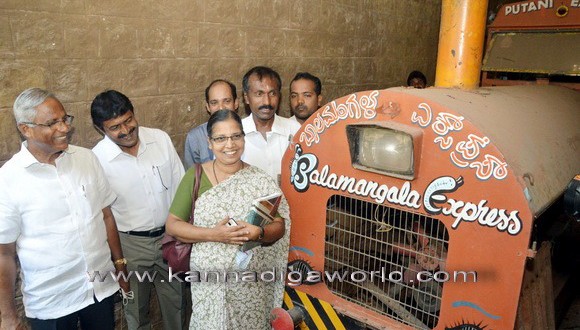 Mangaluru, April 17: Kadri Park here was inspected by MLA J R Lobo, along with officials of the Women and Children’s Welfare Department and Horticulture Department on April 17th.

During the inspection, he noticed that flora in the park lacked maintenance and charged the officials. Water problem has been solved but installation of sprinklers has to be completed.

Addressing the reporters, J R Lobo said, plans are on to develop a park for the differently-abled, and for this purpose we have sought contributions from sponsors. In case we do not receive any sponsor I will do it with the MLA fund, he said.

Few days ago foundation stone was laid for the musical fountain. The project has been taken up at a cost of Rs 5 crore and the amount has already been sanctioned by the state government.

Toy train will be reinstalled in the park with the contribution of women and children welfare department. Rs 37.54 lakhs has been sanctioned for the same and within a span of two to three months this work will be finished. I thank women and children welfare minister Umashree and chief secretary Rajneesh Goel for sanctioning the amount. I have already sanctioned Rs 30 lakhs from the MLA fund for the installation of a new entrance block and a gate, he added

Lobo instructed the officials to concentrate on the maintenance of flora and to install sprinklers throughout out the park. He also directed the deputy director of the horticulture department to set right the park as soon as possible.

Lobo also directed the deputy director of women and child welfare department to hold a meeting with the Zilla Panchayat CEO to chalk out plan to develop the toy train.