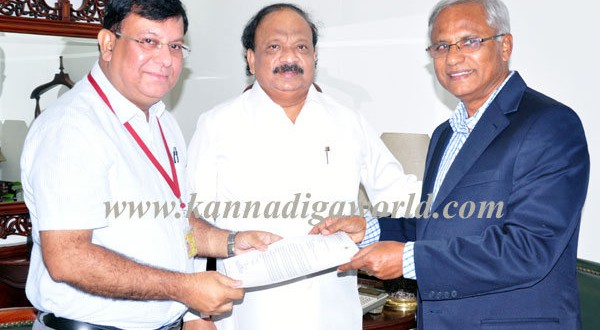 Mangalore: Urging to restart the direct flights to Kuwait from Mangalore, J.R Lobo, MLA of Mangalore south constituency, along with  R Roshan Baig,  minister for Information,Infrastructure development and Haj  met Rohit Nandan, chairman and managing director of Air India at and G M  Siddeshwar, minister of State for Civil Aviation, Govt of India, separately at New Delhi on August 5.

It may be recalled that Lobo had brought the same matter to the notice of the government in previous Assembly session of Belgaum held during November/ December and the govt had replied on the floor that the matter was connected to govt of India and the same will be brought to the notice of civil aviation ministry. However, no concrete action was taken till date. Hence, Lobo along with Roshan Baig called on CMD of Air India and also the Minister for civil aviation separately at New Delhi today.

Lobo requested both the authorities to restart the suspended flights from Mangalore to Kuwait directly. Both, the CMD and also the Minister for Civil Aviation have promised to look into this seriously and promised that the action will be initiated to redress the long pending grievances of NRIs residing in Kuwait.

Besides, Lobo and Baig informed the Minister of Civil Aviation on the need to extend Mangalore runway by another 285 mtrs. Mr Lobo impressed upon the Central Minister that Mangalore is the second International airport of Karnataka whereas the neighbouring Kerala already has 3 international airports and now they are developing fourth one at Kannur. If Mangalore runway is not extended, wide bodied aircrafts cannot land in Mangalore which will hinder the cargo exports and also may lose the international status.

Next to Bangalore, Mangalore is the only airport in Karnataka which has all the potential to grow and become the major destination for industrial, educational and tourism growth. Roshan Baig also insisted that Mangalore should be given all the attention and stated that Karnataka govt will give all the support to GOI to develop Mangalore airport.

Minister for Civil Aviation stated that this project requires an investment of more than Rs 1100 crores. Hence it has to be developed on PPP model as it was done in Cochin and the union minister assured to take up this issue seriously. Rosha Baig suggested that if Civil Aviation Ministry comes with a proper plan, this can be proposed for forthcoming Global Investor Meet.