Photography of JRLobo in office

Lobo’s road show began from Shree Venkataramana Temple at Car Street, and passed through PVS, New Chitra talkies, and returned to Car Street via Navabharat circle with over a thousand followers supporting him.

“Car Street is a commercial centre. Mangaluru has earned its name as model city because of this place. Mangaluru is the city of the educated. Children in every house here obtain higher education and go abroad when they do not get jobs here. Only the parents remain at home. The IT sector, tourism and other sectors should be improved in order to solve the problem of unemployment,” he said.

“The international airport, port and excellent roads here are conducive to investment. We plan to attract investment and provide jobs to young people in the future. Peace and harmony are necessary in the city and people should help in building it. Thousands of crores were received as funds during the last five years. The work that was not performed by the opposition during their twenty years in power was done in the five years of my term as MLA. The main roads in the city are widened and developed, footpaths, drinking water project, disposal of waste, development of markets, ADB project, development of parks, lakes, shelter for the poor, 3D planetarium in Pilikula and other facilities have been provided. Tenders have been called for several projects and several others are in other stages of progress. I request the people of the city to elect me again to complete these projects,” he added.

The roadshow saw a massive turnout of people ranging from auto drivers to shopkeepers who came in to support J R Lobo and blessed him for his success in the forthcoming elections. People were seen thanking him for his pivotal role in the development of Mangaluru. 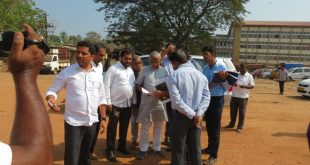 A model market should be constructed at Alike in the city: MLA JR Lobo