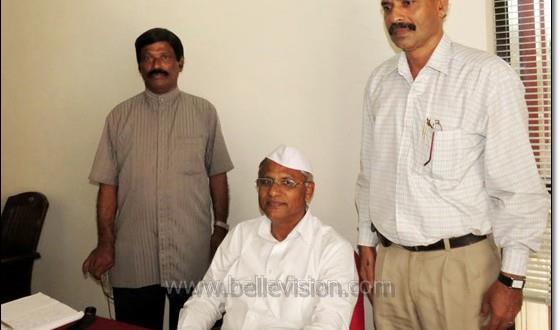 J R Lobo: With vast administrative experience has a clear vision for Mangalore

Mangalore: 26 Nov 2012: John Tauro, Bellevision.com Mangalore representative and myself were to meet Mr. J.R. Lobo Congress Leader at 11:00am on 29th Oct 2012. Since it rained previous during night, the weather was quite cool and it was a perfect day for an interview of one of the most sought after Congress Leaders. Mangalore needs a change and change of guard. JR Lobo has been in the news since formally joining the Congress party in July this year and has been working toward his goal of contesting the forthcoming election if given a chance.

When we reached the office of Mr. J.R. Lobo we found that a number of people had been waiting as the office staff was helping them out with their requirements. Though Mr. J.R. Lobo had given us appointment at 11 am he could not make it However, he called his secretary and apologized for being late due to his other commitments. We did not mind waiting as it was his duty to attend urgent needs of the people of Mangalore City which is quite understandable.

However, his secretary at the office organized for the interview even though she too was extremely busy helping out people, listening to their problems and requirements and giving them proper suggestions patiently.

Mr. J.R. Lobo arrived sharp at 12:00noon as promised. As he walked into the office I found him to be a simple and unassuming man and visualized that he has all the qualities of a gentleman who can support our community if he has given an opportunity to contest election in Mangalore Constituency.

We did not waste Mr. J.R. Lobo’s valuable time soon after greeting each other we settled down for the interview and our main focus was to identify his strength and experience and capabilities to contest the election and deliver the goods.

Bellevision (BV): Sir, have you retired from K.A.S Government service on reaching superannuation or have you taken premature retirement? If it was the latter, what was the reason for it?

JR Lobo: I did not retire as a normal case. It was voluntary retirement. I had another one and half year to go. The reason for retirement was to join politics, mainly because, we as Christians do not have much representation in political field and hence decided to retire and join politics. I thought that with my vast experience in administration I may be able to serve the people in a much better way.

BV: You have taken retirement with vast knowledge and experience and now you have joined Indian National Congress Party. What is your objective and why politics?

JR Lobo: I must say that politics and administration are two sides of the same coin. Political field is fully based on policies and programs and administrative side is to execute/implement those programs and policies created by politics. With my experience in administration for more than 35 years of service I must say that I know in and out of the functioning of administrative process and procedures. Probably I feel that with my vast experience I feel that I am in a much better position to serve people’s aspirations.

BV:   Sir, what are your plans to strengthen Congress Party and make it vibrant?

JR Lobo: Yes, I have plans to carry out welfare measures. However, these measures are not individual based but be society based. Of course our focus is also towards the Adhar Cards and Rations Cards or whatever Individual benefits people need to get. But, besides these measures, what we need to address are the larger projects and programs that are required to be brought into the constituency that I am supposed to represent. Mangalore needs lot many projects. There are a large number of other problems including civic and other allied problems. My basic attention will be towards solving these problems. I also would like to mention that I will be focusing on individual requirements of the people to mitigate their individual problems. But basically I will be more focusing on larger projects and common projects of the city and to improve basic requirements of the people of the city.

BV: Sir, if the Congress Party gives you the ticket to contest from the Mangalore Constituency what are your prospects? What are the financial liabilities and how can you cope up with huge resources required to fight an election?

JR Lobo:   It is left to the Congress Party whether I should contest or not. In case the Congress Party takes decision to give me the opportunity to contest from the Mangalore Constituency, I must say that my chances of winning the election are very bright. Mainly because the long standing service that I have rendered in Mangalore benefiting all communities. Besides, I will be getting strong backing from educated people and also from all the people whom I have served. With their support I am sure I will be able to win.

As for the financial question is concerned, I am sure my supporters, well wishers and my party people will definitely help me and look after my expenses. Without their support I will not be able to contest the election and bear the huge expenses that involve in contesting an election.

JR Lobo: Definitely, I am fully aware of the needs and requirements of the constituency. If I am not aware, I must say that my entire service as an administrator is useless. I have served for more than 25 years in Mangalore. I must say that I know the pulse and requirements of the area better than anyone else. Therefore, I have certain projects and programs in my mind which basically need my attention.   Mangalore requires a sound infrastructure. Secondly, there is a need to bring in new projects to this area so that our youngsters stay in Mangalore rather than go out in search of jobs. The opportunities for the youth are very less here because of few employment opportunities due to lack of new projects. Potentially job creating enterprises such as industry and tourism are not fully exploited or given attention. My intention is to take up these projects so that youth can be retained in Mangalore.

BV: How would you motivate and galvanize the youth and how are you going to motivate and train them, meet their demands, prepare committed workers of Congress Party and who are your faithful collaborators?

JR Lobo: I have answered all these questions above. Obviously, for any party or organization, youth are the back bone. We need to support them and build them. In today’s scenario educated youth leave Mangalore and go out. How will we retain them, how will we build them or bring them into the Congress Party and build the party? That is the main question before us. When we make progress, it is quite possible that the youth will stay here and the Congress Party also will be benefited and eventually Mangalore will be benefited at large.

When the interview was over we thanked Mr. J.R. Lobo for his valuable time despite his busy schedule as there was a big queue waiting to meet him, seek his advice and assistance for their various needs.

John Tauro presented Mr. J.R. Lobo a Gandhi Cap as a token from Bellevision.com team and a few photographs were taken before leaving his office.

At the end of the interview, both John Tauro and myself felt that this is the man the Mangalorean Community is looking forward to deliver the goods. He has the vast experience, he has the political connections and most importantly he has the clear vision and clear plans to lead the city of Mangalore and its people.

ACHIEVEMENTS OF MR. J.R. LOBO AS AN ADMINISTRATOR IN KARNATAKA:

Mr. John Richard Lobo was born in Puttur on 26th March 1953 and his qualifications are:B.Sc, B.Ed and KAS. His last job was at PilikulaNisargaDhama Mangalore as Hon. Chairman of Administrative Committee.

Mr. J.R. Lobo has worked in various capacities in Government Service at different locationsof Karnataka. Following is the list of his assignments since 1977:

7. Served as Additional Dist. Magistrate and Headquarters Asst. to Dy. Commissioner of D.K District in 1993-1997.

13. Served as founder Executive Director, PilikulaNisargaDhama, Mangalore from past 18 years.

Other Special Assignments were:

1. Member of Regional Task Force for the development of D.K and Udupi District.

2. Undergone Social training in Indian Institute of Public Administration for the development of SC/Sts.

Mr. J.R. Lobo was the founder Executive Director of Pilikula Project and successfully developed this project for 18 years. The total concept of this project was developed by him. He was solely responsible for scouting for funds with state and central govts and also from local donors. Today it is a success story and a major project in Mangalore. For the first time in the country a 3D planetarium in Pilikulawill be put up at a cost of Rs 24.50 crores for which entire initiative including the concept and getting the sanctions for funds was done by Mr. Lobo himself. Similarly different projects in culture and heritage, wild life, botanical garden, fisheries, art & craft, science etc are conceived and brought to Pilikula. It is his dream to develop it as an international centre for tourism, learning and conservation of bio diversity & culture.

As a Commissioner and also as Project Director of KUDCEMP, Mr. J.R. Lobo was responsible for many initiatives in Mangalore. He had initiated the concreting of roads and did major roads from Bunts hostel circle to PVS circle and then from PVS circle to Lady hill circle. He hadconceptualized the entire concreting of Airport road from Polytechnic to Maravoor Bridge near airport and got sanctions from Govt. of India after rigorous follow up action. Hewas responsible for the implementation of new projects of Underground drainage, water supply and concreting of roads in the city under KUDCEP project. He had initiated for processing of solid waste for which required infrastructure was created, required lands were acquired for land fill and given to City Corporation. His personal initiative helped to successfully completing the required infrastructure like water supply,drainage, roads and solid waste management for Mangalore city.