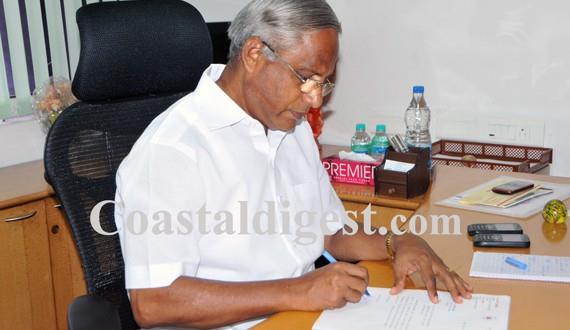 He is one of the success stories of how a bureaucrat with decades of experience not just enters the bastion of politics but even tastes success. J R Lobo, during all his 35 years of civil service, stretching from 1977 to 2012 has worked at various capacities in Somwarpet, Puttur, Koppa or Sirsi. He is no stranger to Mangalore because hailing from the region, he also served as the erstwhile Mangalore City Municipal Commissioner and as the Head Quarters Assistant to the then District Commissioner of Dakshina Kannada, Shri Bharat Lal Meena, he was responsible for conceptualizing and bringing up the Pilikula Nisarga Dhama.

After defeating the four times MLA from Mangalore South Constituency, this Assembly polls, Mr Lobo has got into the shoes of a politicians. With challenges ahead, Mr Lobo gets talking about his plans.

What is your top-most priority for Mangalore as an MLA and what is your plan of action?

There are two priorities for the city – a strict law and order situation, because nobody should be allowed to take the law into their own hands and improving basic infrastructure facilities.

A stable law and order situation has to be established in Mangalore. In connection with this, all instances of moral policing have to stop completely. And whoever takes the law in to their hands will be dealt with very severely.

To achieve this, the existing machinery will suffice and will be utilised to take action. The government will not tolerate inaction of any body. We are going to take strict action about it.

Secondly, the basic infrastructure facilities in Mangalore such as footpaths, storm-water drains and paths, have to be completed or improved. New projects have to be brought in, to make Mangalore one of the important cities of Karnataka. Because we all have the major infrastructure such as the all-weather port, international airport, railways, and national highways. Now, these infrastructures have to be put to best use.

The connectivity from Mangalore to Bangalore calls for improvement. We need to see to it that investment flows in four sectors, such as tourism sector, education sector, industries and the IT sector. These sectors have to be taken care, for which the basic requirements necessary have to be strengthened.

jrlobo3In view of the negative publicity that the city has received over the past, how do you propose to improve the tourism in the city?

For any place to develop, the most important thing is law and order. Mangalore had a beautiful brand image previously, which has been dented. Our job now is to restore it. Once the brand image is restored and the investors feel that the place is safe, investments will come automatically in any sector.

By when can the people of Mangalore expect the vented dam to be completed?

The pending works of the vented dam are going to be completed by one year. Although there is no dearth of water in terms of its source, hiccups such as electrical problems, machinery problems and distribution exist which have to be sorted out. These will be sorted out following detailed discussions with the engineering section.

What do you propose to do about flooding in low-lying areas in the city during monsoons?

Flooding in low-lying areas occurs due to various reasons, and not solely due to clogging of existing drainages. De-silting and maintenance of the existing drainages has to be done. Apart from that, when builders fill up the low-lying areas, they do not provide proper underground/storm-water drainage facility. I have visited number of places where this problem exists. Mangalore Urban Development Authority (MUDA) when they give approval for layouts in these particular areas, they should see to it that the drainage system is constructed as per the flow or contour. But this does not happen, because of which the artificial flooding takes place. I am going to take up the matter with the Urban Development Authority.

A multi-level car parking system was proposed by the administration to be set up in the city. Can Mangaloreans expect such a system in the city in the future?

This project has been in limbo since few years. We are going to take up all pending developmental projects in the city one by one, even those good projects proposed by the previous government.

Are there any plans of scientific disposal of waste collected from the city?

The Corporation has to take up the initiative for that. The powers to implement it lies with the corporation and joint-discussions will be held the body to take up any good initiatives.

Regarding segregation of solid waste from individual houses, we will promote resident associations to accomplish that. If there is co-operation and participation from people, then it would be successful.

A new building for the central market has been proposed. By when could we expect the project to be completed?

It is a new project that has been proposed, and which would be taken up seriously. However, it is still in the planning stage, and hence, too early to state when the project would be completed, since there will be several initial hiccups.

The fish market in Bejai is already under construction, which will be expedited and expected to be completed within a year.

Are there any proposals to bring in a plastic ban in Mangalore?

There is no such thing in mind to ban plastic entirely because it is a necessary evil. However, a ban on certain grade or specification of plastic could possibly be done.

What is your vision for Mangalore?

Like I mentioned, we need to focus on the four sectors, tourism, education, industries and the IT sector. If these are developed, then Mangalore can become a big city.