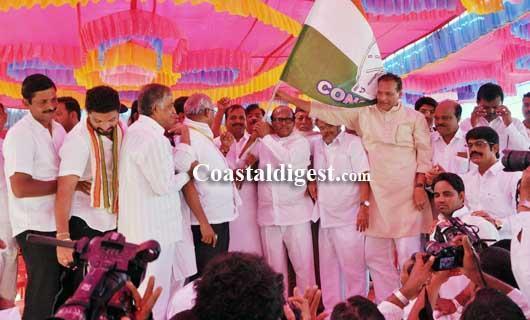 Image from Post Regarding It’s a fight between me and Narendra Modi, says Janardhana Poojary

It’s a fight between me and Narendra Modi, says Janardhana Poojary

Mangalore, Mar 14: Dakshina Kannada District Congress Committee on Friday launched a massive padayatra to inform the people about the contributions of the Congress government and to create a pro-Congress wave in the constituency which is ruled by BJP

Speaking on the occasion, Mr Poojary declared that the in Dakshina Kannada constituency it would be a direct battle between him and BJP’s prime ministerial candidate Narendra Modi as saffron party here was asking for votes in the name of Gujarat chief minister and not in the name of their MP candidate Nalin Kumar Kateel.

“I consider this as a direct fight between me and Narendra Modi. Let the BJP field Mr Modi from Dakshina Kannada constituency instead of Mr Kateel, who has done nothing for his constituency during his tenure as Member of Parliament,” he said.

Calling Modi a liar, Mr Poojary pointed fingers at the ground realities of Gujarat, where the gap between rich and poor was constantly increasing during BJP rule. “Modi’s development chants are nothing but lies. The fact is that we can find around 40 per cent of unemployed people in Gujarat. One-third of the small scale industries have shut down. The condition of farmers under Modi’s rule is inexplicable. Around 800 farmers in Gujarat have ended their lives,” Mr Poojary said and recalled the 2002 riots where thousands of people were killed and women were raped in broad day light.

Warning BJP’s prime ministerial candidate that he may face problems if he failed to produce his marriage details before election commission, Mr Poojary said that retired school teacher Jashodaben, who had married to Mr Modi when she was 17 years old still is still leading a lonely life.

Karnataka Health Minister U T Khadar expressed hope that Congress will regain Dakshina Kannada Lok Sabha constituency through 2014 general elections. “People of the district are aware that BJP MPs have done nothing for them. No one can forget the contributions of Mr Poojary to the district and nation,” he said.

Interestingly, U Kanachur Monu, who was also one of the Congress ticket aspirants from Dakshina Kannada constituency, was at the forefront of the rally. Mangalore South MLA J R Lobo, former MLA Mangalore North Vijaykumar Shetty and Mangalore Mayor Mahabala Maarla also participated in rally.