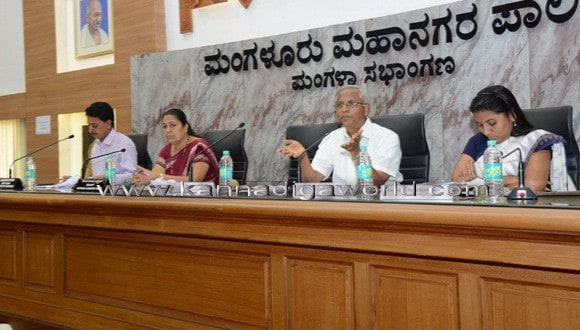 Mangaluru, May 9: In a review meeting chaired by urban development minister Vinay Kumar Sorake, on Friday May 8th at Mangaluru City Corporation here, MLA JR Lobo insisted to introduce single window system to issue license for construction of houses measuring less than 2,000 sq ft; so that the licenses could be issued sooner.

CREDAI president, D B Mehta during the meeting said that license for constructing houses and buildings had been pending for long. An official in response to this said, out of 2,233 applications, 1,902 were issued and 331 are under process.

License should be given on first come, first serve basis and issued within a maximum of two-three months. The bylaws should be either amended or new bylaws introduced, he said.

J R Lobo suggested the MCC commissioner Hephsiba Rani Koralpati to having a file monitoring system. Hephsiba Rani replied, there are minor lapses in providing licenses. A file disposal drive will be conducted to clear the pending license applications.

J R Lobo asked the officials of Antony waste management company to explain its work as per the contract. The officials of the firm replied that their work included door to door collection of solid waste, cleaning of drain measuring less than one metre, sweeping certain roads, and cleaning 6 km stretch of the beach.

Prakash Salian said that in some places waste collection was done well but in some places the waste was collected once a week and in some places twice a week. This is not done because people are facing problems. The company drivers say their salaries are not paid and there is labourers shortage, so it is difficult for them to collect waste daily, he said.

MCC commissioner in response to the matter said, the company has been paid for salaries and fuel, and the remaining amount will be paid soon. The company has given two bills of Rs 1.66 crore and Rs 1.84 crore. We will exclude the drainage work as it is not yet done. A deadline of one week has been given to start drains cleaning work and by the end of May all the drains in the city ought to be cleaned.

Former mayor Mahabala Maarla said that a road cleaning machine worth Rs 52 lakhs has been lying in the shed. As per the contract, Antony Company has to take the machine on rent and use it to clean the city, he said.

J R Lobo asked the health officer to monitor the work done by the Antony company.

Sorake said that a special meeting would be chaired to discuss plans for upgrading the markets and June 15th has been set as deadline to complete work of Bejai and Jeppu markets.

About the renovation of Town Hall, MCC commissioner Hephsiba Korlapati said that there were some technical issues which have been almost resolved now. New tenders will be called and the work will be completed as soon as possible, she said.

Undue delay in issuing birth and death certificates were also discussed in the meeting.

J R Lobo said that there was a lot of confusion over issuing of birth and death certificates, even though the system is computerized and certificates are supposed to be disposed off within a day.

After probing on this, minister Sorake directed the MCC commissioner to suspend the clerk named Bhaskar on the spot.