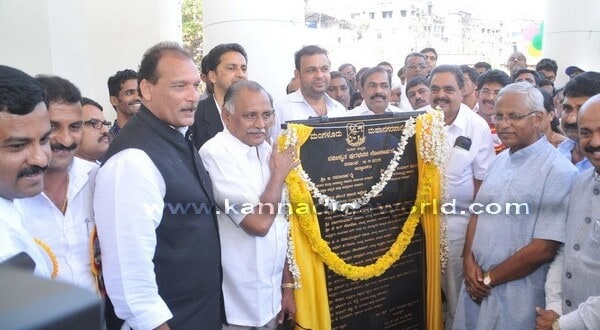 Mangaluru, November 14: The renovated Town Hall in Mangaluru was finally inaugurated in a grand ceremony held on November 14, Saturday after over an year long renovation work.

Referring to the unpleasant incident reported across district over the past few days, the Minister appealed the people to maintain clam and live in peace and harmony.

Minister Vinay Kumar Sorake, we live in a competitive world. The central government has included Mangaluru city in the list of Smart Cities, and Mangaluru stands first out of the 20 cities selected by the centre in the first phase. All should join hands in developing the city. The city can get water supply round the clock once the Thumbay second vented dam is complete, he said.

MLC Ivan D’Souza, said the Town Hall in Mangaluru is the best of all the Town Halls that are present in other districts. I request the state government to introduce a uniform rent system for town halls across Karnataka. The MCC must install solar system to produce electricity for Town Hall, he said.

Deputy Commissioner A B Ibrahim in his address said that the renovated Town Hall needs to be maintained well so that it looks beautiful as now even after many years.

A beautiful dance program showcasing the tradition and culture of the coastal region was exhibited. A tribute was paid to India’s first Prime Minister Jawaharlal Nehru on his birth anniversary.