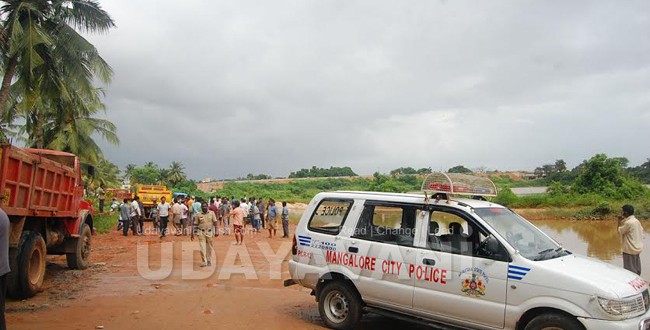 The tippers have been handed over to Ullal police station.

The tippers were seen carrying sand from Nethravathi river bank using dozers at Adam Kudru. Asst Commissioner along with his team inspected the tippers and found out that out of nine tippers only one tipper had the permission to transport the sand.

J.R Lobo, Mangalore South MLA who was on his way to attend a public programme visited the spot after receiving the information of the inspection. He advised the officials to fine the truck drivers who are involved in the sand transportation without permission. The locals submitted a memorandum to the MLA to look into the matter.

The locals expressed their angst against the officials for seizing the dozer as it was not directly involved in the sand transportation. Rajesh Ferrao, truck driver, who had the valid permission to transport the sand said, the officials have seized the dozer for being involved in the sand mining. As the river is deep dozer cannot be used to collect the sand. The truckers loaded the sand which was collected by the boats. Only the loading work was done by the dozer.

Ramesh Hanapura, Ullal station inspector and others police officials were present at the spot.