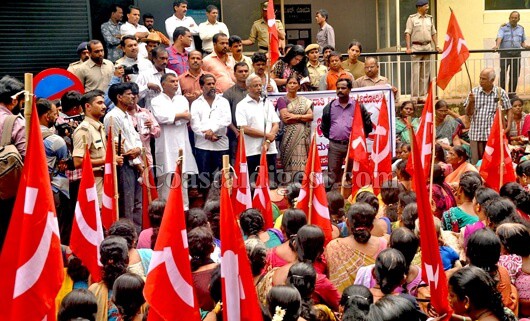 Image from post regarding Housing sites for the poor: Protesters ask JR Lobo to fulfill his poll promise

Mangaluru, Jun 23: Hundreds of women and men took part in a demonstration organized by Communist Party of India (Marxists) in front of the office of J.R. Lobo, MLA, Mangaluru City (South), in the city demanding housing sites for the poor.

The demonstrators took out a procession from Nanthoor junction before converging in front of Mr Lobo’s office at Mallikatta on Monday. This is third such protest by the CPI(M) in the city since last year demanding sites.

Addressing a gathering Vasantha Achari, secretary, Dakshina Kannada unit of the party, said that even though providing housing sites for the poor was one of the promises included in Mr Lobo’s election manifest more than two years ago, the latter did not take any necessary steps in this regard.

“In his manifesto for the Assembly election, Mr Lobo had promised that vacant government land would be identified in the city and it would be reserved for the sites. However, he has forgotten this promise,” Mr Achari said.

Recently, the MLA said that 11-acre land had been identified near Kannur for building apartments for the poor. But no steps have been taken to turn that into reality, he said.

The Union government on the other hand is attempting snatch the land of poor farmers through an Ordinance for land acquisition for development projects, he lamented.

Sunil Kumar Bajal, secretary, Mangaluru City South Committee, went on to claim that some of the rich in the city have encroached upon government land, but no steps have been taken against them.

Meanwhile, Mr Lobo approached the protesters and tried to convince them. He promised that the process of allocation would start soon, as the city corporation has received more than 1,200 applications seeking the sites.

A blueprint has been prepared for constructing ‘ground plus two’ type apartment blocks in Kannur, he said adding that about 500 applicants would be accommodated in it in the first phase.

Each flat would cost Rs. 4 lakh. The government would grant Rs. 1.20 lakh and the city corporation would grant Rs. 20,000 per each flat. The balance amount would have to be borne by beneficiaries through bank loan, he said.