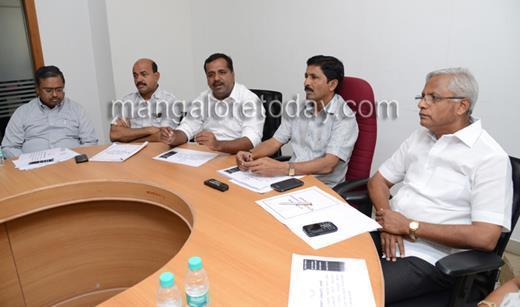 Mangalore, May 11, 2014:  State Health and Family Welfare Minister UT Khader has directed the officials to take preventive measures to combat vector-borne diseases like Malaria and Dengue in Mangalore.

The Minister was addressing a review meeting on malaria control programme  on May 10, Saturday. The meet was also convened to review the health campaign in the MCC limits.

He further  directed the MCC to take up the task of cleaning water tanks in the city.

Mangalore South MLA JR Lobo while stressing the need to maintain cleanliness also pinpointed towards the cleanliness problems at various market places in the city. He also drew the attention of the authorities  towards the lack of facilities like a public toilet in Jeppu market which makes matters worse.

Steps must  be taken to see that there is no water logging, he said.

BA Moidin Bava, MLA of Mangalore North said  Suratkal which came under his constituency did not have proper drainage system which makes matters worse.

Mahabala Maarla, Mayor, lack of cleanliness at construction sites will be evident if CREDAI and Health officials conduct a joint inspection.