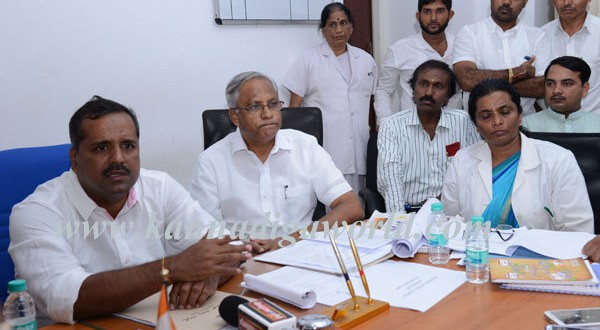 Speaking at the press meet held on August 8, Friday, he said that we do not have any threat of getting the virus spreading from Africa, but still passengers will be screened. The department will also take steps to protect doctors who will screen the passengers.

He said that he would write to health minister of Kerala, Delhi and Mumbai to screen passengers in the airports in that state.

Khader also urged the people, who wish to travel to African countries, to change their plans till the threat subsides.

Speaking on the mortuary work, he said that, Wenlock will have the sophisticated mortuary which will be a model hospital in the state. The hospital will be upgraded with facilities like bathrooms, seating arrangements and drinking water for families, who visit the mortuary.

Around 99 percent of sewage treatment plant work has been completed and the water will be used for garden and toilets, he stated.

Apart from it, the process to set up directly observed treatment (DOT) centres for TB patients is on.

He also expressed concerns over increasing number of communicable diseases, which is caused due to stagnant water and solid waste. In most of the cases, diseases spread as people from other places come to Mangalore and Udupi. The department is making best efforts to tackle the diseases.

Minister said that support allowance for ASHA workers has been increased to Rs 2,200 and their family will be provided with health insurance under Arogya Sanjivani scheme.

MLA J R Lobo said that Mangalore must get a trauma centre since it would help patients who come from distant places.

In turn, Khader said that, second level trauma centre would be ideal for Uppinangady or Sakleshpur since when the accident take place, injured will be taken to either Hassan or Mangalore for treatment. Discussion in this regard is already started.