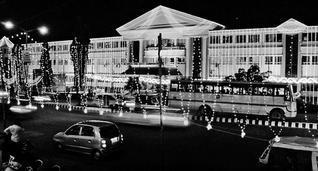 Image from Post Regarding Harinath, Mahabala favourites to be Mayor

Harinath, Mahabala favourites to be Mayor

After almost a year of councillor election, the Mangalore City Corporation will get Mayor and Deputy Mayor on Thursday.— File Photo: H.S. Manjunath

After almost a year of councillor election, the Mangalore City Corporation will get Mayor and Deputy Mayor on Thursday.— File Photo: H.S. Manjunath

The Mayor and the Deputy Mayor of Mangalore will be elected on Thursday — almost a year after the councillors were elected — even as a Congress conclave is scheduled on Wednesday to finalise its candidates.

Sources in the Congress told The Hindu that the Minister in-charge of Dakshina Kannada and senior leader B. Ramanath Rai met party councillors separately on Monday.

A secret meeting of the party leaders, comprising MLAs B.A. Mohiuddin Bava and J.R. Lobo, a day ahead of the elections would decide on the candidates.

The other senior contenders in the line are Lancelot Pinto (ward no. 31, Bejai), Naveen D’Souza (ward no. 38, Bendoor), Deepak Poojary (ward no. 18, Kavoor) and Bhaskar Moily (ward no. 36, Padavu East), the sources said.

Mr. Harinath, belonging to Jogi community (Other Backward Class), had served as Deputy Mayor in 1993-94.

The sources said that there was a strong lobbying within the party to give prominence to Bunts community in the selection of Mayoral candidate. If the lobby has its way, the party could opt for Mr. Marla.

Though Lancelot Pinto is the most senior councillor (elected for the sixth consecutive term), it is not yet clear if the party will field him. Some sections of the councillors argued that as J.R. Lobo was elected MLA of Mangalore City South and recently Roy Castelino was made president of Karnataka Konkani Sahitya Academy, Christians had been given enough representation.

In the 60-member council, the Congress has 35 seats, the BJP has 20, the JD(S), two, and the CPI(M) and the Social Democratic Party of India have one seat each.

There is an independent councillor, too.