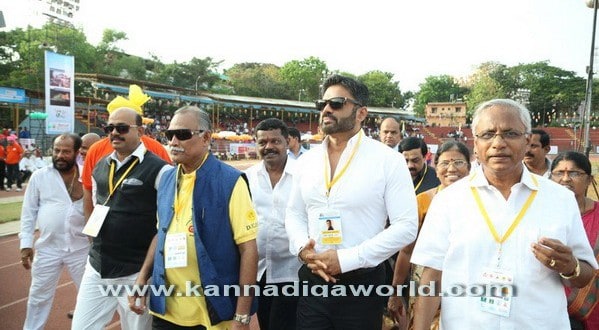 Mangaluru, May 1: Mangala Stadium in Mangaluru was glimmering with the presence of dignitaries, athletes from across India and sports lovers flocked to witness the opening ceremony of the 19th Federation cup national senior athletics championship on Thursday, April 30th. This is the first time that such a national event is being organized in this stadium. The event will go on till May 4th.

State minister for higher education RV Deshpande, inaugurated the event by releasing as many as two thousand balloons in the air.

Speaking on this occasion, minister Deshpande said, in order to give more encouragement to sports, the state government has extended complete support to organize this national sports in Mangaluru. As the Chief Minister was unable to attend this event due to pre-scheduled programs, due to his absence, I am inaugurating the sports event, said the minister.

Renowned Bolly wood star Sunil Shetty who was the chief guest on this occasion said, being the son of Tulunadu, I feel proud to participate in the opening ceremony of such a sports event. Let the fame of Mangaluru in sports still rise higher, he said.

Prior to the inaugural ceremony wonderful procession went on comprising of the Police Band of Mysuru, Thattiraya, drum, colourful umbrellas, Kerala band team, Theyyam, Kudubi, Yakshagana, tiger dance, Kalladka dolls, Veeragase, Nagari and many other teams drew the attention all.