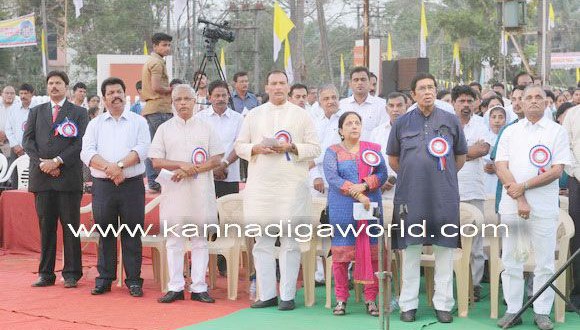 Mangaluru, November 28: The St John Paul II Shrine was inaugurated and blessed by Dr Salvatore Pennacchio- Apolistic Nuncio to India, at Bajpe on Thursday November 27th, immortalizing the historic visit of the then Pope St John Paul II to Bajpe back in 1986. The statue of St John Paul II, was also blessed by him which was gifted to Mangaluru by the Vatican City.

The Mass was followed by a formal stage program.

Dr Francis Serrao spoke about St John Paul II and said, he had suffered much during the German Nazi regime and how he came to be known as the ‘Uncle of Poland’. He also said, St John Paul II had great devotion towards Mother Mary and always chanted the rosary even until his last breath.

Addressing the audience, Dr Salvatore Pennacchio said, “I feel very happy to be here to inaugurate my spiritual father’s shrine. Where ever St John Paul II visited, he spread the message of peace. This is the first shrine in India dedicated to Pope John Paul II”. He lauded all the people who worked and contributed in building this wonderful shrine.

Dr Gerald Isaac Lobo said, “John Paul II was canonized saint within 9 years of his death. As Pope, has travelled to various parts of the world. He was a messenger of peace, a guide to the youth of the world. I was first made bishop by him, I still have his sign of cross and rosary. I feel great devotion towards him. I considered him a saint even when he was alive. Whenever the media asked me about my meeting with him, I would say I had the chance to meet a living saint. This place was made holy after his visit”.

Oscar Fernandes, speaking on the occasion said, “I had opportunities to meet John Paul II whenever he visited India. I was also the Indian representative to attend his last rites. I had the chance to see the bullet that struck St John Paul II. I thank each and everyone responsible for the building of this Shrine”.

MLC Ivan D’Souza memorised the visit of St John Paul II and said, “When St John Paul II came to Mangaluru, I was involved in the preparations and tied the buntings and flags. I got into the crowd and was blessed by him. Let us work together to make this Shrine shine”.

MLA Mohiuddin Bava also and stressed on communal harmony and peace and expressed his happiness over being a part of the program.

The event was compered by Ivan Noronha, George D’Souza and Sidney D’Souza.