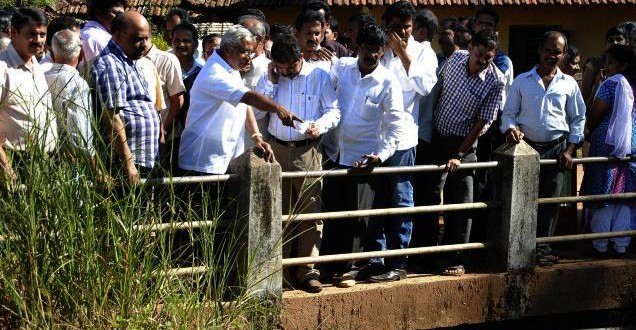 Image from Post Regarding Give us our road back

‘Give us our road back’

Residents interacting with J.R. Lobo, MLA, at the site of the proposed bus terminus, which is hanging fire for four years, in Mangalore on Thursday. Photo: H.S. Manjunath

In the land acquisition for a new city bus terminus near Mahaveer Circle (Pumpwell Circle), residents of Maroli, Vasant Nagar and Simon Lane have lost a 20-foot road that served as important link for them to the city.

Today, four years later, residents of 1,500 households in the locality have no bus terminus and are forced to take a bumpy mud road which is not motorable.

On Thursday Mangalore South MLA J.R. Lobo visited the area, along with Mangalore City Corporation Commissioner Ajit Kumar Hegde and other officials, after complaints by residents about the problems they were facing.

K. Narayana Vailaya said residents have been bearing with the absence of a motorable road for the last four years since the MCC acquired seven acres for the bus terminus. “Moving on this mud road not only poses problems for motorists but also pedestrians. A short spell of rain turns this road slushy,” he said. He said several two-wheeler riders have injured themselves after falling off their vehicles on this one-km-long bumpy stretch.

Vasanthi Rao, a senior citizen, said autorickshaw drivers refuse to come to their houses. “They demand double the meter charge to move on this stretch. When it rains they leave us midway,” she said. Ms. Rao asked the MLA to make arrangements for a motorable road in their areas. Ravindra J., a resident of Vasant Nagar, said even after a number of representations to the corporation, it had failed to address their problems. “In the past four year, officials keep parroting that they have to make a survey. We do not know when this survey will be over. There are doubts over the feasibility of a bus terminus here,” he said.

Mr. Lobo did not have any relief to offer the residents. “There is a need of a detailed plan (of the proposed bus terminus) even for laying the road. Plan would be ready by January. You need to have patience.” When a resident questioned about the time that has elapsed, Mr. Lobo said the delay was because of absence of a proper plan. “But I cannot answer for what happened earlier. I can say only about future action.”