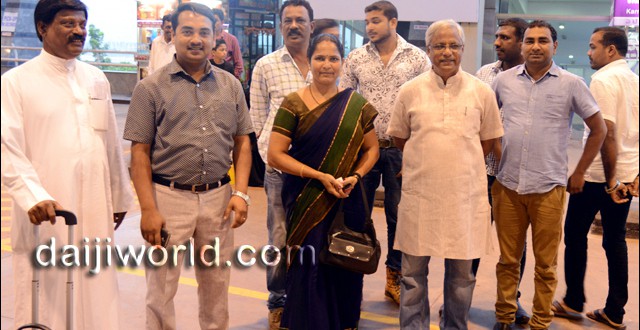 Mangalore, Oct 27: Bringing much joy and relief to scores of Mangaloreans, the Mangalore-Kuwait Air India operations finally resumed on Monday October 27, with the first flight of the season taking off from Mangalore International Airport at 7.30 am.
Mangalore South MLA J R Lobo, Karnataka minister Roshan Baig, MLC Ivan D’Souza and MP Nalin Kumar Kateel along with several organizations and individuals had put in continuous efforts to reintroduce the Mangalore-Kuwait flight service which had been stalled for almost a year.

Speaking to media persons, Lobo, who boarded the flight to Kuwait along with his wife, said, “Mangalore-Kuwait flight service had been stopped for almost for a year. Eight months back when we raised this issue in the Vidhana Sabha, our state government held talks with the central government and the answer we got was that Mangalore was very poor in financial investments and there were not many flight services and therefore reintroduction of the Mangalore-Kuwait flight service was not possible.
“In July 2014, once again we tried and met Air India director and managing director and explained our problems. They said that they would look into our problem, after which we met union minister of state for civil aviation G M Siddeshwar and urged him to resume the flight service. The outcome of the meeting was positive,” he said.
“The main thing is that it is easy to start a flight service but then it should gain profits in return. That is how we can keep the flight operations alive,” he added
He also requested all Mangaloreans to patronize this sector and live up to their promises to keep it going. “We tried our best and it is time for the people to take care of it,” he said.
Lobo thanked Roshan Baig profusely for supporting the cause. “Mangalore should be developed and for this reason I am going to hold talks with Kuwait passengers to make them invest in Mangalore. I am going to Kuwait to discuss this topic with various organisations there,” he said
Former MLA Vijay Kumar Shetty congratulated J R Lobo on the success of his efforts and said, “We should not stop this service anymore in future, as J R Lobo has put all his efforts into restarting it.”

Sweets were distributed among the guests and to the passengers in celebration.
Mangalore Air India manager Nagesh Shetty, deputy mayor Kavitha Vasu, Denis D’Silva, T K Sudhir and others were also present.
The flight from Mangalore to Kuwait will operate on Mondays, Wednesdays and Fridays, departing from Mangalore at 7.30 am and reaching Kuwait via Bahrain at 11.15 am (local time).
In the return direction, the flight from Kuwait to Mangalore will operate non-stop, taking off from Kuwait at 12.15 pm local time and arriving in Mangalore at 19.25 hours local time.