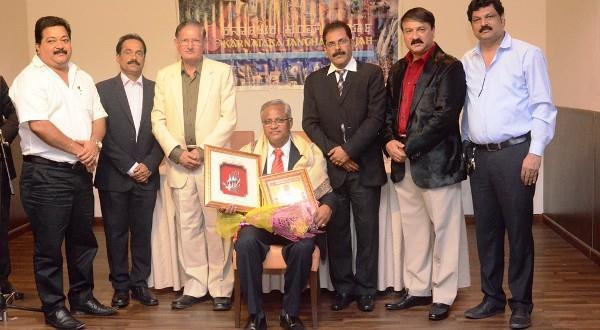 The programme was attended by presidents and office-bearers of various community organisations of Karnataka in the UAE and also many other Kannadigas who came in good number.

The programme started with opening remarks by Shantaram Achar, followed by prayer by Rajesh Kuthar. President of Karnataka Sangha Sharjah, Satish Poojary welcomed the guests and presented them bouquets. Patron of KSS Mark Denis in his inaugural speech spoke about the Sangha and its activities all through these years and briefed the audience about how KSS has promoted Kannada literature, people and folklore in this part of the world, including honouring of prominent personalities with Mayura Award and at the same time promoting blood donation.

Ronald Colaco rendered a short and brief speech covering various aspects including what he foresaw with the new leadership of J R Lobo as an elected representative from Mangalore. He also spoke about his contribution to the society he belongs to and requested everybody to think about giving back to the society in whatever possible way. He also talked about taking Dakshina Kannada and Udupi districts to a new level with the support of NRIs who should come forward voluntarily to participate in the development process. He thanked the Sangha and said he initially did not realise that the Sangha was doing such a great work.

Congress MLA J R Lobo was felicitated with shawl by Mark Denis, bouquet by Lenny D’Souza, souvenir by Satish Venkataramana, memento by Harish Sherigar and felicitation letter by M E Moolur. J R Lobo thanked Karnataka Sangha Sharjah for the felicitation and appreciated the Sangha for all the good deeds the Sangha is engaged in. He briefed about the political system and encouraged NRIs to come forward with their plans in investing in the districts of Udupi and Mangalore. He said that tourism is the best option to promote the twin coastal districts given the natural resources available. “We need to take our district to a new level by promoting tourism while improving the infrastructure so that it will attract tourist from all corners,” he added.

J R Lobo was then open for a question and answer session wherein many prominent people in the audience, starting with Harish Sherigar, raised their concerns. J R Lobo agreeing to some of the concerns also answered questions and said that we jointly need to work on certain issues. He promised to try his best in the development process of the twin districts of South Kanara and Udupi as far as possible to the expectation of the people of these districts. Due to paucity of time the session was concluded as Lobo had to reach the airport to catch return flight.

Leaders of various community associations of Karnataka in Dubai honoured J R Lobo with bouquets and mementos and later there was a photo session with all the members of the Karnataka Sangha Sharjah.

The programme concluded with vote of thanks and buffet dinner.