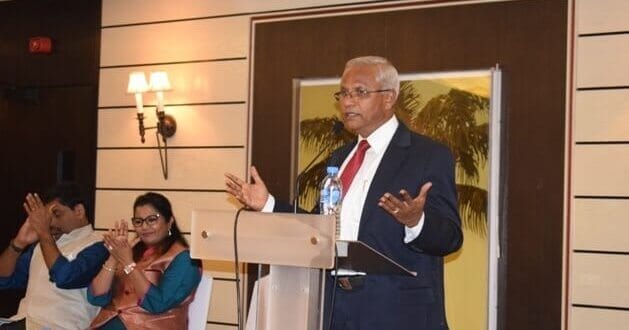 Image from post regarding Doha: Lobo interacts with NRIs, says he believes in politics of development

Doha: Lobo interacts with NRIs, says he believes in politics of development

Doha, May 3: J R Lobo, MLA of Mangaluru South constituency who was the guest of honour for the silver jubilee celebrations of Mangalore Cricket Club (MCC) had an interactive session with Karnataka organizations in Qatar on Saturday April 29 at 5.30 pm at the Radisson Blu hotel.

The evening began with an opening note from, PRO of IFKCA, Roshan Castelino. Guests for the evening J R Lobo, Milan Arun, president of Indian Cultural Association (ICC), and Walter Nandalike, managing director of Daijiworld were escorted by the president of MCC to the dais.

Walter Nandalike of Daijiworld introduced J R Lobo to the gathering and gave an overview on the work of J R Lobo during his current tenure as the MLA of Mangaluru South constituency. ICC president Milan Arun briefed the MLA about the 7 Karnataka organizations in Qatar and the work they do for the community in Qatar. She highlighted the diversity among the various organizations and the unity that binds all the organizations under the umbrella of ICC. She informed the audience as to how Lobo had helped out her friend from the Keralite community when approached on a specific issue in Mangaluru. She also took the opportunity to thank Daijiworld TV for giving her opportunity to give an interview on the occasion of International Women’s Day in March.

Lobo, who is also the deputy chairman of Christian Development Committee and chairman of the Legislative Committee for Backward Classes and Minority Welfare, briefed the attendees about his dreams and visions for Mangaluru. He said that Mangaluru is developing and he believes in the politics of development, and that whenever he has been approached by people with problems he has kept an open door policy as it is his responsibility to help out one and all.

“Mangaluru is a fast growing city, and has tremendous potential for development in the coming days. The Smart City project will take Mangaluru to the next level. I invite Mangalureans to come back once your commitment here is fulfilled, and be part of Mangaluru’s progress. I also urge the business community to invest in Mangaluru,” he said.
He briefed about the projects that will be coming up in Mangaluru – in its development as the Smart City, in fisheries, Asian Development Bank-aided infrastructure and drainage projects, and river water development projects.

Thereafter, the attendees had the privilege of interacting with J R Lobo. Questions on areas of electricity and safety, environment protection, airport development, industrial area, sports village, traffic, airport staff and formalities were raised. Lobo answered each question patiently and proved that he is not just a politician but a statesman with real concern for the growth of Mangaluru.

The evening came to an end with snacks and tea. This session was arranged by Mangalore Cricket Club (MCC) in co-ordination with Youth Congress leaders Roshan Castelino and Denis D’Silva.