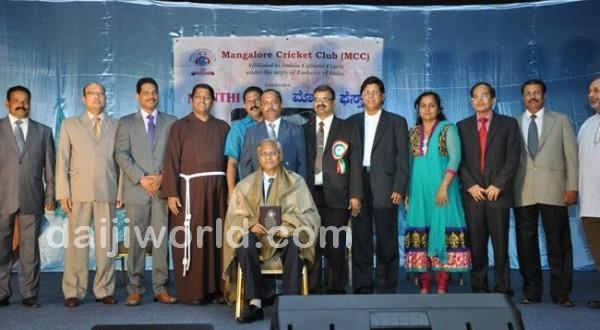 In his key note speech, Lobo expressed his gratitude for the efforts MCC is exerting in bringing the Mangalorean konkani community together, keeping it bonded as a family through the much wanted cultural activities and thereby creating a mini Mangalore in the city of Doha. He encouraged MCC to continue their service to the community to keep alive the Mangalorean culture and the Konkani language in Doha and make feel the konkani people at home.

In his key note speech Lobo expressed his thanks to all those who worked hard to get him elected to the Karnataka Legislative body and remembered that though the Konkani speaking community is a minority, people from all walks of like voted him to the office with the sole intention to bring in change. He reiterated his intention of making Mangalore a model city and second only to the Karnataka capital.

President Sunil D’Silva in his welcome speech summarized the hitherto achievement of MCC and outlined the upcoming programmes. He commended MCCs efforts of the past 21 years in celebrating the Monthi fest and novem jevaan from a meager 15 members to a whopping 700 or so people now.

Prakash Noronha, General Secretary introduced J R Lobo and club President honoured him with a shawl and memento for his selfless service to the community over the years as a Govt of Karnataka civil servant, and now as the member of the legislative body.

Fr Anand Castelino, OFM Cap, spiritual director of Konkani community of Our Lady of Rosary Church, and Stany Alvares were the guests of honour. Fr Anand in his address, he likened MCC to a roof, who provide shelter to the newly arrived in Qatar, helping them get integrated into the society and extending a helping hand to the destitute. He then blessed the roce and offered the grace before meals.

MCC news letter ‘Sugandh’ and Harry Correa’s maiden CD as producer and Roshan Belman’s 5th vol. “Tunch Tum” was released by Fr Anand. Harry a semifinalist of Soad 3 International later said that it was possible only because of the opportunities and encouragement from MCC.

Earlier in the day, more than 75 members of the club gathered to prepare the Novem Jevaan, Roce, Vorn and the vegetables at Jerry and Leena D’Mello’s residence under the leadership of Vivian D’Souza, Jossy D’Souza and Ivy Rosario while some ladies prepared Sannas in their homes.

The programme was compered by Rony Rodrigues and Sony Rodrigues. The evening ended with a Bingo game conducted by Jossy Rodrigues.

MCC Executive Committee thanks all volunteers who joined hands in the preparation of Novem Jevaan, all participants and all who supported in every way to make this program a success. May Mother Mary bless each and everyone.