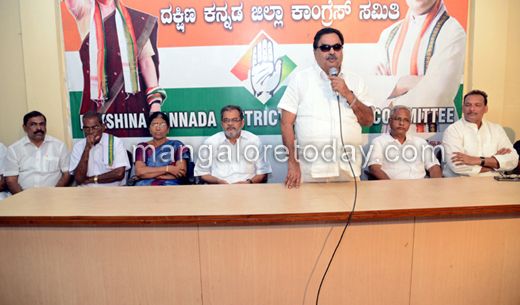 Mangaluru, Dec 29, 2014 : The 130th Foundation Day (Sthapana Diwas) of the Indian National Congress was observed at the District Congress Office on December 28, Sunday.

Ivan D’Souza, MLC who spoke at the function said the Congress was the only party in India which treated all communities on par. He also stated that the late Prime Minister Indira Gandhi played a pivotal role in strengthening the nation’s economy through nationalisation of banks.

Coming down heavily on the present BJP government at the Centre for sidelining great Congress leaders who laid down their lives for the cause of the nation,he was also critical of the government for observing Christmas Day as Good Governance Day.

DK District in-charge Minister B Ramanatha Rai also spoke about the contributions of Congress leaders for the cause of the nation’s freedom and regretted that some forces were now trying to defame some leaders. He also strongly deplored the plans of a Hindu outfit to set up a memorial for Mahatma Gandhi’s killer Nathuram Godse. This is nothing but an insult to the Father of the Nation, Rai said.

JR Lobo, MLA of Mangaluru South said the Congress party has as its objective the welfare of the under privileged sections of the society and assured that the party will continue its good works which will help it to come back to power.