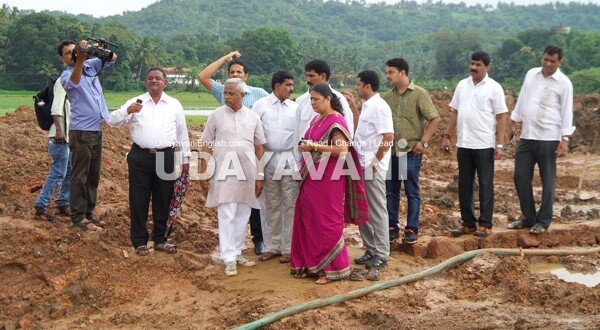 Mangaluru: The 18 mgd water pipeline at Kannur burst about four days ago, making the taps go dry across the city.

However taking serious note of the issue, MLA J R Lobo has directed the Mangaluru City Corporation officials to register criminal complaint against those private players who dumped mud on the water pipeline damaging the pipelines. The MLA has said that heavy penalty must be levied on the culprits and they must be made to bear the entire repair cost.

Meanwhile, the district administration has made arrangements to supply tanker water to meet the water requirements of the city. Over 15 tankers have been pressed into action to provide drinking water.

The individuals who have wells at home have been spared from the water pangs. Since it is rainy season, the water level in the wells are also abundant and hence the individuals have been generously providing water from their wells to others.

Unfortunately, the ones who have been living in rented apartments here in the city have packed their bags and gone back home. Though one of the pipeline was repaired on Sunday, it burst in a while, bringing no respite. The repair works went on till late night on Monday and the situation has not yet been brought under control. However, J R Lobo confirmed that both the pipelines will be functional by Tuesday evening.