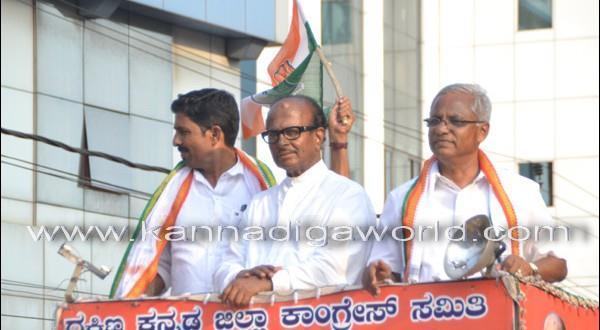 Image from Post Regarding Congress concludes poll campaign with a rally

Mangalore, Apr 16: On the last day of campaigning, the District Congress took out a rally in support of B Janardhan Poojary from Nehru Maidan on Tuesday April 15.

The rally was flagged off from Nehru Maidan and moved through State Bank circle, Rao and Rao circle, K.S. Rao road, PVS circle, Ballalbagh, Ladyhill and concluded at Urwa market.

Speaking on the occasion, B. Janardhan Poojary expressed his gratitude for the young men and women for taking part in the rally and supporting him. The congress workers have supported me through- out the campaign seeking votes with the hope to gain victory in the upcoming election.

U T Khadar, Minister for Health and family welfare said that the congress workers and activists have put their all efforts for the victory of Congress candidate Janardhan Poojary. The people of the district will identify the greatness of congress candidate and elect them to represent in the Parliament.