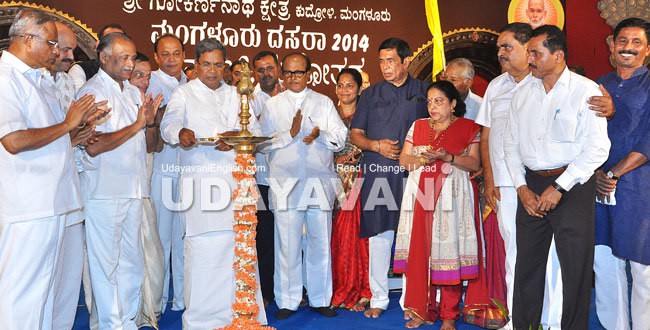 Inaugurating the Mangalore Dasara, he expressed hope that devotees would not oppose proposal for women priests to perform pujas in the Religious and Endowment Department temples.

He was reacting to a suggestion in this regard made by former union minister and managing trustee of the Kudroli Temple committee Janardhan Poojary.

He expressed also hope that Mangalore Dasara in the coming years would turn out to be as prominent as the Mysore Dasara festival.

“Karnataka Government would consider appointing women priests to conduct pujas in state-run temples. We should strive to unite the society and not divide it. We should live together with love and faith. Though people of various religions worship various Gods, God is one” he said.

Recalling the contributions of social reformer from Kerala Sri Narayana Guru, who consecreted the Kudroli temple in 1912, he said the Guru fought against untouchability when lower caste people were not allowed inside temples and the revolution had started from Kerala.

He urged all sections of society to fight against the suppression of women and protect them.

The Dasara celebrations would conclude on October 4 with a grand procession.

The Mangalore Dasara was being celebrated at the temple for the past two decades under the guidance of Janardhan Poojary, who played a key role in renovating the temple in 1991.

UPA chairperson Sonia Gandhi had inaugurated Mangalore Dasara in 2012 and 2013. Many of the temples in the city including Sri Mangaladevi Temple celebrate Navaratri, but the festival at Kudroli Temple has its own significance as it is being celebrated as `Mangalore Dasara`.

A huge number of devotees and tourists throng Kudroli temple to witness the installation of Navadurge and Mahaganapathi idols during the festival. A colourful Dasara procession held annually marks the end of ten-day festival at Kudroli Temple.

Spiritual leader and social reformer from Kerala Sree Narayana Guru, who fought for the entry of all sections of people into temples, had consecrated the `Shivalinga` at Kudroli temple in 1912, when backward communities and Dalits were denied entry into temples.

The Kudroli temple was later renovated and inaugurated by former Prime Minister Rajiv Gandhi on February 8, 1991.