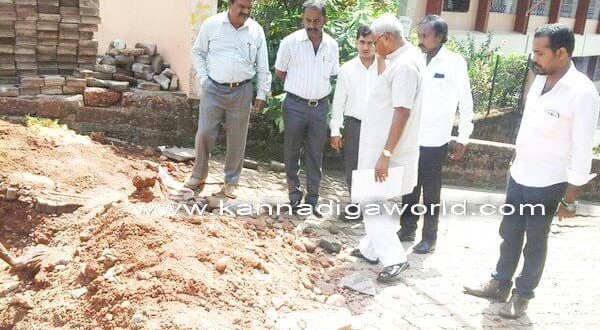 Image from post regarding By-lane near school damaged in the city after water pipeline bursts.

By-lane near school damaged in the city after water pipeline bursts.

Mangaluru, May 30: Damage has been incurred at a by-lane located next to St Theresa’s School, Bendore here after a water pipeline burst while installing cables with the help of directional boring machine on Saturday May 30th. Reliance Company undertaken the work, it is learnt.

Gerald Towers, a resident of Bendore complained that the Reliance workers had damaged the water pipeline at around 9:30 pm on Friday May 29th and that they had left the spot without repairing or bringing the matter to the notice of the Mangaluru City Corporation.

Whole night until around 8 am in the morning on May 30th, the water has been flowing. Due to this, the interlocks laid for the road have sunk in and the sand has completely washed away on to the roads, Gerald said.

Schools are re-opening from Monday and this bylane is the only way to reach the school entrance. Children would not know that the interlocks are sinking and it might pose danger to their lives. The re-arranging works of the interlocks may take more than a week, he said.

He said, he has given an oral complaint with the Kadri police station and added that if the Reliance workers fail to remove the stones and the sand on the road, he would give a written complaint to the police station.

Just a month ago the road was re-laid has been damaged now. The locals complained that the area corporator Sabitha Misquith has not been responding to their concern. It has caused inconvenience to the vehicular movement.

MLA JR Lobo inspected the place, where a road and utilities have been damaged due to the negligent work undertaken by contractors of Reliance company. He called up MCC commissioner and instructed her to suspend the licenses until they repair the road and other damages.

It is also alleged that Reliance has not sought permission from the MCC for the installation of underground cables.

Engineer Arun arrived to the spot, inspected and said that a clamp of the water pipeline has been damaged which could be replaced.

Mangalore Electricity Supply Company Limited (MESCOM) staffs also visited the spot. They informed the workers hired by Reliance Company not to touch the electrical cables passing through the same spot.