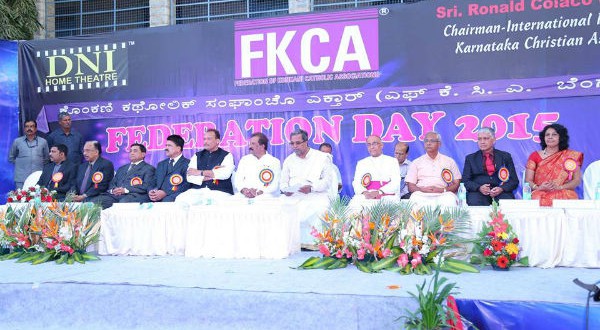 Bengaluru, Feb 4: The FKCA’s annual “Federation Day” was celebrated with all glamour and splendor on the February 1,2015. The event was graced by the Chief Minister of Karnataka Siddaramaiah and the Archbishop of Bangalore, Dr Bernard Moras.
The programme commenced with a solemn Holy Mass celebrated by the Bellary Bishop, Dr Henry D’Souza and other priests as concelebrants. The stage program began with the arrival of the Chief Minister at the venue. FKCA Chairman Edward D’Souza welcomed the distinguished guests and the gathering. He also reiterated the unfulfilled demand of the Karnataka Government to allocate a community land for FKCA and solicited the CM to look into the matter at the earliest.
FKCA which is an apex body representing over 30 Konkani Catholic Associations in Karnataka and different parts of the country & the world, honored three Konkani Catholic achievers for being rolemodels to the Konkani community in their respective professional domains- Edwin Joseph Francis D’Souza was given the Lifetime Achievement Award, Jacob Crasta was presented with the Professional Excellence Award, while Austin Roach was accorded with the Entrepreneur of The Year Award.
In his address,the Chief Minister of Karnataka, Siddaramaiah stressed upon the need to be good human beings. “There are many who try to divide people using religion. The government will protect the rights of the minorities “he added. He assured the gathering that the promise made by the former Chief Ministers in the previous years for a considerable size of land to FKCA, will soon be fulfilled.
The Archbishop of Bangalore called upon the Catholic community to raise their voice against movements like ‘GharWapsi’ and ‘Saffronization’. He also said “Christians should protect themselves from such ideas; it is dangerous,.”
MLC Sri Ivan D’Souza, who was one among the Guests of Honor, recalled the services of Konkani Catholic Community to the nation, and suggested the youngstersto come forward with dedication and willingness in-order to garner political recognitions and thus play a major role in the upliftment of the society.
Roy Castelino, president of Karnataka Konkani Sahithya Academy vocalized the trouble caused to Christians by different anti-peace organizations and urged the government to take stringent steps to establish an environment where linguistic freedom and practice of faith can be enjoyed by every Christian.
The other eminent Guests of Honor who made the event special were K J George – Honorable Home Minister, Government of Karnataka and J R Lobo – Honorable Member of Karnataka Legislative Assembly.
In his address J R Lobo urged FKCA and the Konkani Catholic community to come forward with an unique project of sheltering the poor.
LeenaLobo ,Cultural Secretary, FKCA, proposed the vote of thanks to all the dignitaries and member associations of FKCA for making the day memorable .
The star attraction of the cultural extravaganza was, a melodious ‘Konkani Saanz’ by ‘The Milestone Band’ led by the young Konkani star Kevin Misquith. It also included dance and musical performances from various Konkani associations.
The programme was compered by Vernon and Neri with their lively and unique style. DJ Romel added spark to the event.
A hearty thanks to the sponsors of the event-Sri Ronald Colaco & Family, DNI Home Theaters, Deccan Group, Hebron Properties, Neumatica, Associated Hydro Pressing Pvt. Ltd.; Mangalore Hills Groupand other donors who supported the event.
The presence of large Konkani Catholic community of Bangalore added fervor to the’ Federation Day’ 2015.