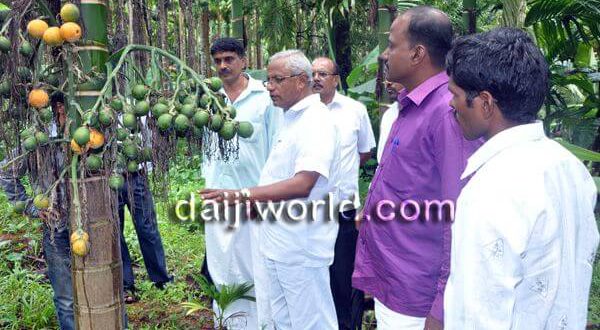 Bantwal, Aug 2: “I will discuss in the Vidhana Sabha, the difficulties faced by areca and rubber growers in the coastal villages and bring to the notice of the government,” said Mangaluru South MLA J R Lobo.

He made the statement on Tuesday August 2, after he visited Peruvai grama near Vittal in Bantwal taluk and listened to the grievances of farmers there. He also went to their houses and witnessed the hardships they faced. He saw the crops grown by the villagers.

Speaking on the occasion he said that rubber and areca, main commercial crops of the coastal region, are facing several problems. “The farmers are disappointed with the reduction in yield and fall in market prices. The state government will be persuaded to announce support prices for areca and rubber crops like in Kerala,” he said.

“Though farmers have committed suicides all over Karnataka, there are no suicides in this part of the state as farmers grow mixed crops. Therefore suicides of farmers can be prevented by growing mixed crops,” he opined.

Meanwhile MLA’s visit to the rural area of Vittal and study of the crops along with them has made the farmers glad. There is appreciation to the promise made by J R Lobo regarding raising the matter in the Vidhana Sabha.