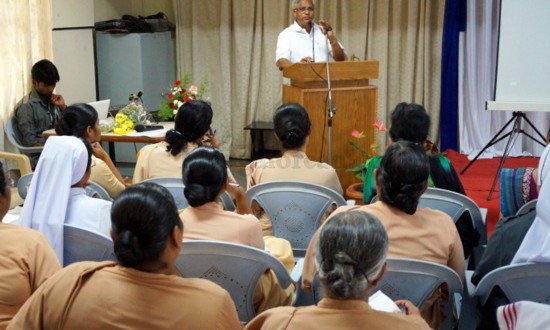 Bangalore: ‘There should be Zero Tolerance for Child Abuse’ – Archbishop Bernard Moras

Bangalore: Archbishop Bernard Moras was very vocal in his feeling towards the children under our custody in our schools and institutions and said that there should be zero tolerance towards child abuse in any form. He dwelt on length on sexual harassment and said that transfer was not the solution but strictest punishment should be meted out to the perpetrators and they should not be spared at any cost. He was speaking at the workshop organized jointly by the Karnataka Regional Organization for Social Service (KROSS) and Karnataka Regional Commission for Education (KRCE) for Promotion and Protection of Child Rights and Good Governance in our Institutions on 1st and 2nd September, 2014.

J R Lobo (MLA), who spoke on the Right to Education Act which considerably affects the Minority Schools, assured that he would take up the issue with the Government for bringing in changes that would safeguard the interest of the minorities but said that a delegation needs to be taken to the Government to convince it on the issues affecting the community and institutions.

The workshop was facilitated by Robinson D’Souza, former Law Secretary to the Government of Karnataka, who explained threadbare to the participants the nuances of the Sexual Harassment Act, labour laws, POCSO Act, JJ Act and Child Rights. The other speakers were Vincent Consesso (former Assistant Labour Commissioner), Fr Edward and Fr Pramod.

Fr Eugene Lobo, Secretary, KRCE welcoming the gathering remarked that Archbishop Bernard Moaras was a man for the people who did not know how to say “NO”.

Fr Peter Brank, Director, KROSS briefed on the need of the workshop and how it needs to be carried forward so that the management and the staff are educated on various acts.

The participants who had come from all over Karnataka appreciated the workshop and termed it as excellent.