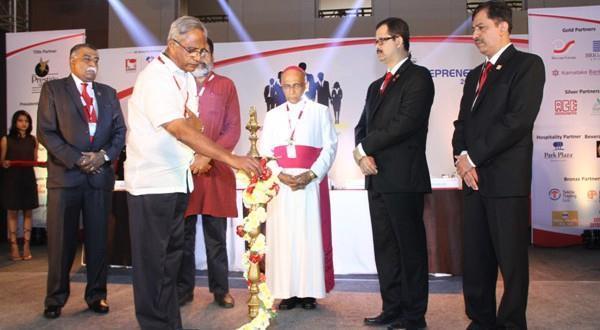 Bangalore, Jan 31: Leaders from religious, business and political arena came together at the Entreprenet 2014 inaugural session of the first-ever global convention of KE Global, hosted by its Bangalore and Mumbai chapters Kanara Entrepreneurs and Dimensions, in Bangalore, got off to a fabulous start with Archbishop of Bangalore Dr Bernard Moras, Mangalore South MLA J R Lobo and Chairman of Manipal of Global Education Services Pvt Ltd T V Mohandas Pai setting the tone by asking the business leaders and entrepreneurs to serve society and humanity at large with an ethical, compassionate and committed vision.

The Archbishop of Bangalore, who declared the two-day event at the Park Plaza Hotel in which nearly 400 successful and budding entrepreneurs, business leaders, corporate executives and professionals are interacting and networking with stalwarts in different fields and unveiled the logo of Entreprenet 2014, said the basic task before all those involved in business, government and society was to do what is right and give back to society so that all received equal opportunities, facilities, guidance and mentoring to succeed.

The message of Pope Francis at the recent World Economic Forum at Davos, the Archbishop said was an eye-opener for all. Recognising the fundamental role of business and industry to develop and stimulate human resources for reducing poverty, improving healthcare and educating the less privileged sections of society to enable to lead dignified lives as human beings was imperative and a noble challenge, he said.

Lauding the initiative and multi-faceted activities of KE Global and its chapter members comprising about 1500 entrepreneurs, business leaders and professionals in the Middle East and in Mumbai and Bangalore, Archbishop Moras said trust and credibility, being compassionate and ethical and committed to serve their less fortunate brethren was of utmost importance for all.

Honesty in communication and all professional and personal dealings, integrity, keeping promises and fulfilling commitments, loyalty, ethical conduct, fairness and justice, caring and compassion, respect for others, being law abiding, commitment to excellence, building and protecting reputation as well as accountability were some of the essential qualities that would prove the worth of business leaders and entrepreneurs, he said.

Advisor to the Manipal Group of Educational and Medical Institutions after a successful stint as Chief Financial Officer of Infosys, T V Mohandas Pai, who delivered the key-note address and released the Global Convention’s Diary, said the theme of ”Building Business Leaders” was very apt and highly relevant in the present circumstances when the country was facing a virtual leadership crisis marked by lack of direction, ethical standards and upset and angry at the widespread and rampant corruption as well crony capitalism.

When thousands of entrepreneurs have succeeded even a larger number had failed, he said asked the young and budding entrepreneurs to be attuned to the globalization environment where competition and innovation were the key challenges. It was necessary that the mindset of the entrepreneurs need to change and must be innovation-led to succeed.

Based on his 17 years of experience in Infosys, Pai said entrepreneurs need to be problem solvers, be able constantly on the lookout for opportunities, be passionate and high energy drivers at industry and business enterprises were no longer 9 to 5 kind of cushy jobs but 24×7 undertakings which required competitive spirit. They should be able to lead from the front and provide leadership by example and be able to manage people and lead team work by inspiring people to give their best and ready for perseverance and accept frustration and failures, should be pro-active and always be on the lookout for opportunities, ideas and technological challenges besides encouraging enterprising spirit and qualities among the colleagues and also respect talent and merit and incentivize performance while offering rewards if their enterprises were to succeed, he said.

Mangalore South Assembly member JR Lobo, said great mistakes are often committed due to enthusiasm but without enthusiasm it must be noted that nothing great can be achieved. ”Unless we venture to dream big, the chances for achieving and attaining our full potential will be lost,” he said.

The 21st century is a century of great possibilities, dreaming big and achieving more by coming together through team work and networking. ”Unless the net is big enough, it is not possible to haul a big catch of fish. So also, the thrill and joy of swimming in the deep sea will not be available if one is not prepared to go into deep sea,” he said pointing out that hard work, learning and getting motivated is the key to success.

KE Global Chairman Ivan Fernandes underscored the need for Enterprenet 2014 and the objectives of the organization. Drawing inspiration from Thomas Alva Edison, who had over 1000 patents to his credit, Fernandes said such a pioneering innovator and scientist had remarked that barely 1 per cent was inspiration and 99 per cent perspiration in all new ventures. While failure is inevitable and part of the business environment, he said it was necessary to imbibe the courage to say that one has found 10,000 ways in which the idea would not work when confronted with failure.