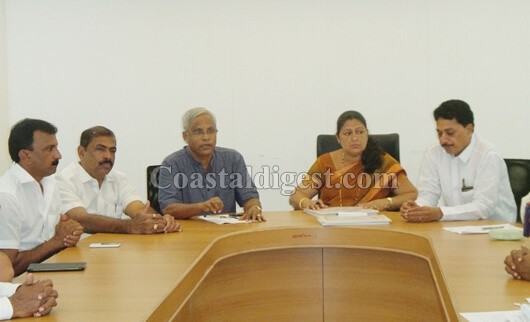 Mangaluru, Aug 6: With regard to the water crisis in Mangaluru City Corporation (MCC) limits due to bursting of two major water supply pipes, Mangaluru South MLA J R Lobo directed the MCC officials to remove excess mud from over the underground pipes on a war-footing, to avert similar disasters in the city limits.

Speaking at a meeting with MCC officials in the presence of Mayor Jacintha Vijaya Alfred and others, he instructed them to book criminal cases on all those who had illegally dumped mud in places leading to the pipes bursting under the excess weight. Then, identify the presence of possible dangerous spots where the two major water supply pipes were susceptible to breakage. Such areas where extra mud is dumped over the underground pipes should be immediately cleared to avoid exerting pressure on the pipes, he said, instructing the officials to clear the excess mud over the pipes within two days.

He also instructed the engineers and supervisors to conduct a survey to determine and establish illegal land acquisition by land owners. Conduct a documentation on land acquired illegally and carry out the demarcation of land where the pipes exist. In addition, where the two pipes have been interlinked, remove the interlinks to avoid problems in the future. There should be a contingency plan ready for implementation, in case of occurrence of similar crisis in the future, he told the officials.

The scour walls of the pipes also have to be examined, said Mr Lobo, adding that help from big industries such as NMPT, MRPL, MCF and KMF should be sought such as tankers and machinery to cope with the crisis in times of disasters in the future. Executive engineer Shivashankar Swami and other MCC officials were present in the meeting.