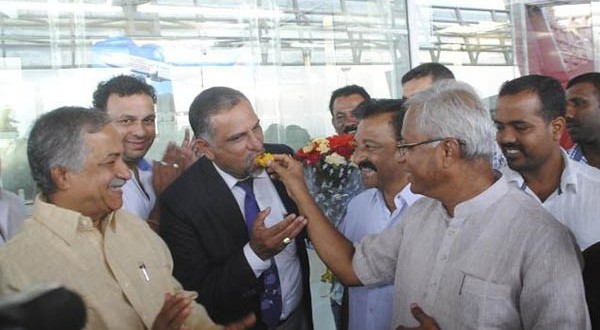 Air India had withdrawn the service in February citing a loss of revenue on the sector and a lack of aircraft.

The reintroduced Air India Express, a low-cost carrier of Air India, will operate thrice a week, on Mondays, Wednesdays and Fridays, according to Nagesh Shetty, station manager, Air India, Mangalore.

The Boeing 737-800 aircraft can accommodate 186 passengers and it will fly from Mangalore to Kuwait via Bahrain. It will be a direct flight from Kuwait on its return leg, Mr Shetty said.

The flight will leave Mangalore International Airport at 7.30 a.m. and reach Kuwait at 7.25 p.m.

As many as 166 passengers flew the inaugural flight of the reintroduced service and 162 of them were adults. Of them 97 travelled to Bahrain and 65 to Kuwait.

JR Lobo, MLA, Mangalore City South, was among those who flew to Kuwait.

Speaking to presspersons at the airport, he said that this flight was reintroduced to help non-resident Indians from Mangalore and the North Kerala region.

In this flight’s absence, many would have to travel to Kuwait via Mumbai.

Mr Lobo said that he was flying to Kuwait to appeal to the non-resident Indians to “patronise” the service and sustain it.

He would also appeal to different organisations in Kuwait to invest in Mangalore.

Mr. Lobo said that when he and R. Roshan Baig, Minister for Infrastructure Development, Information and Haj, met Rohit Nandan, Chairman and Managing Director, Air India Ltd., to urge for the reintroduction of the service, the latter had told them that without the support of the non-resident Indians sustaining the service would be difficult.