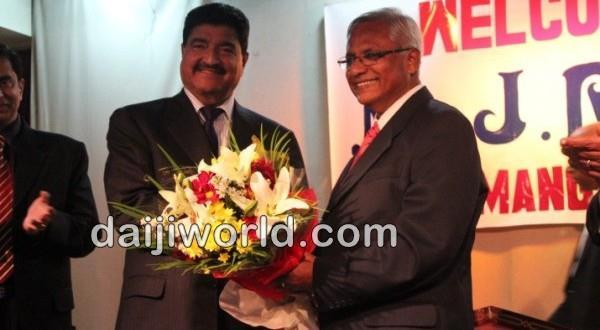 Image from Post Regarding J R Lobo interacts with Mangaloreans, assures to do his best

Abu Dhabi: J R Lobo interacts with Mangaloreans, assures to do his best

During his interaction he highlighted the projects which have been earmarked in the undivided district of Dakshina Kannada and the steps being taken to implement them. He spoke at length about the problems facing the democratic process, which he envisaged will be solved within the next 3 – 4 years.

Lobo also stressed on not to expect any miracles due to various reasons. He promised that being MLA and former bureaucrat, he would do his best to meet the aspirations of the people of Mangalore and its vicinity and asked for support and cooperation from fellow Mangaloreans.

Stating that Mangaloreans are intelligent and enterprising, he also asked for suggestions for the improvement of Mangalore city that would help make it the second major city, next only to Bangalore. He also sought investment from NRIs to improve Mangalore.

“Tourism must be given priority as there is plenty of potential in Mangalore, being a city of educated and intelligent people. To do that, we have to improve infrastructure like roads, footpaths, drainage and garbage disposal systems etc, which is being done on a warfooting,” he said.

During the interaction session he answered questions in a professional manner by giving apt replies.

He impressed the audience by his open and intelligent speech delivered in chaste Kannada and also said he felt like he was in Mangalore as the whole programme was conducted in Kannada, the state language of Karnataka.

Padmashree Dr B R Shetty, CEO of New Medical Centre, applauded and highlighted the services of Lobo as a bureaucrat and his services to Mangalore in various ways and hoped he will enable Mangalore gain its past glory through his intelligence and vision. Also, on the occasion Valerian D’Almeida brought to the notice of J R Lobo the plight of Mangaloreans and requested him to look into various issues which were the need of the hour.

Bennete D’Mello welcomed the gathering and Valerian D’Almeida delivered the vote of thanks. Canute compered the event

The session was attended by Mangaloreans based in Abu Dhabi along with guests from India and the UAE.