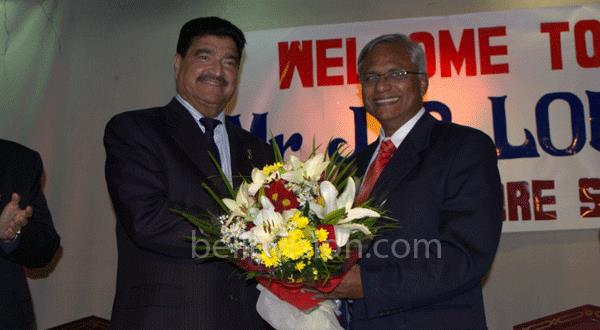 The meeting began at 7:30pm with Canute Pinto (Member KCO) welcoming the crowd and invited the guests Mr. J. R. Lobo, Dr. B.R. Shetty, Mr.Sudheer Kumar Shetty, Mr. Leo Rodrigues and Valerian D’Almeida, Bennet D’Mello (KCO President) and Rony Pinto (Hysna Group) to the dais. He also introduced Mr. J.R. Lobo and said helped the when he was DC of Mangalore and won many awards for his dedication and service to Mangalore Corporation and people.   He specially emphasized on his mammoth work for Vamanjoor Pilikula and Nisarga Dhama and carved a name for himself as a one of the finest director of Pilikula Nisarga Dhama.

Dr. B.R. Shetty praised JR Lobo for his selfless service to Mangalorean community and pledged his support for tourism in Mangalore which is initiated by JR Lobo.

On behalf of Konkani community Mr. Valerian Almeida put forward many proposals to make Mangalore a a model city, namely improve the traffic lights, signals, parking facilities, widening the streets and many other developments that needed an urgent attention.

In response Mr. Lobo said that he felt as if he is in Mangalore and said his responcibilties are now doubled.hearing many proposals and he said that he has proposed 45 major proposals including a medical college, widening runway Dist office, tourism infrastructure metro from Manipal to Konaje doubling of Konkan railway track and Bangalore-Mangalore railway and national highway are some of them and also mentioned Mangalore is in 13th place in infrastructure in India and he also said that to become 2nd city after Bangalore.

He highlighted about the tourism in Mangalore he said tourism depends on destination and uniqueness of that place. he said we have to show the world the uniqueness and should attract people from the globe and mentioned tourism policy should be changed.

Promised within short period will see improvement at central market   Kadrimarket, Urwa Market Kankanady market and KSRTC bus stand will be shifted and present will be the city bus stand.   He promised that he will work tirelessly for three years and finally would like to have people’s feedback and improve upon the suggestions and will implement new projects.

There was also interaction session after that and present pathetic condition of Mnagalore was raised by many for which JR Lobo pledged to work upon once he returns to Mangalore.

Canute Pinto proposed the vote of thanks.   A light refreshment was served to all attended.