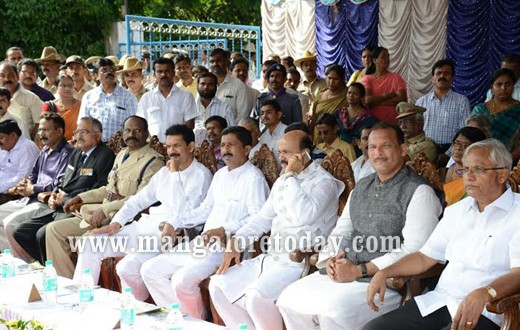 Mangalore, Aug 15, 2014:  The 68th Independence Day was celebrated with patriotic fervour and spirit in the city on August 15th Friday. DK District in-charge Minister B Ramanatha Rai hoisted the national Tri-Colour at the Nehru Maidan. He went on an open jeep and received the salute from the NCC, Seva Dal students who presented an attractive march fast on the occasion.

In his address, Ramanatha Rai said it is the duty of each and every citizen to remember the patriots and freedom fighters who sacrificed their lives for the cause of the nation’s independence. The minister also stressed the need for peace, harmony and brotherhood in the society. He further enlisted the several welfare programs launched by the state government for the development of the weaker sections of the society. Under the integrated tribal development scheme the minister handed over 5 auto rickshaws, an Eeco car and a Maruti van to beneficiaries, laptops to 4 students who scored high marks in II PUC.