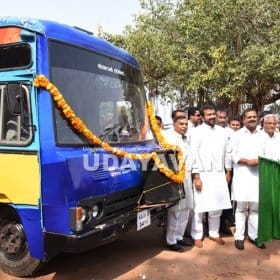 Mangaluru : State Revenue Minister Srinivas Prasad launched the ‘caste census’ vehicle at Circuit House here on Monday, April 6. The landmark census will be held from April 11 to April 30 across Karnataka.

Addressing the gathering he said that the survey is an initiative of Chief Minister Siddaramaiah. Since the census form comprises 55 columns and takes about 40 minutes per house, he urged the public to co-operate with the enumerators.
Responding to the Beary Sahitya Academy’s proposal to include subcastes in the form that exist among Muslims, the Minister said that Islam comprises 82 sub-castes and that the enumerators have been informed to write Muslim under religion and mention the sub-caste in brackets.

Speaking about the exclusion of mention of Roman Catholic and Protestant in the survey form, Mangaluru South MLA J R Lobo said that Christianity is a religion and that Roman Catholic and Protestant are not sub-castes but classifications within the religion. He added that the survey is of socially backward classes and castes and not survey of religions.

When asked about the alleged corruption and disappearance of files in the Revenue Department, Minister Prasad said that he had introduced several changes after he assumed power. “As many as 1.62 lac RTCs have been done through Kandaya Adalats. Earlier documents were handwritten, thus leading to several errors. We are mulling for computerization of records and the pilot projects have been launched in Tumakuru and Kolar districts, wherein a person has to just file the application about corrections in RTC and we see to it that the corrected RTC reaches the applicant’s home. The applicant need not go to Thahsildar or the Assistant Commissioner.”

He added that he had directed the officials concerned to hold as many as 40 Kandaya Adalats every year in the presence of Village Accountants and the district Deputy Commissioners. “We have already conducted 6,000 such Adalats and have made around 8 lakh corrections. Regarding missing files, I will launch a probe and stringent action will be taken against those found guilty.”

Health Minister U T Khader and MLC Ivan D’Souza were present among others.