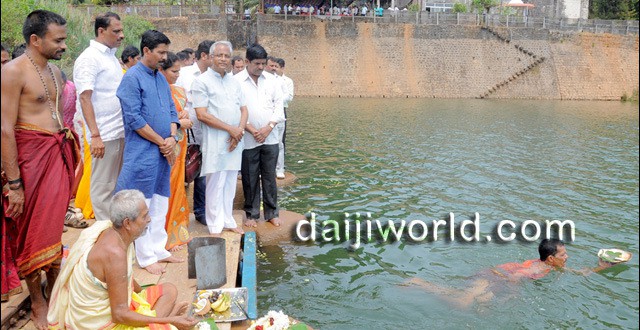 Bantwal, Mar 10: “Forest is the source of life-saving water. Land will remain only if the forest remains. Nature’s imbalance can also cause a drinking water problem. So, it is the responsibility of everyone to preserve the environment,” said B Ramanath Rai, district-in-charge minister.

He was speaking after participating in ‘Ganga Pooja’ and ‘Bagina Arpane’ in Thumbe vented dam on behalf of Mangaluru City Corporation on Tuesday March 10. “The project of constructing a check dam through the western channel is in progress. River water will be purified and distributed to the villages like in urban areas and the foundation stone for the project is already laid in Bantwal taluk,” he said.

Mangaluru MLA J R Lobo, after offering Bagina, said, “There is enough water in the dam and the people in the corporation limits will not be put to hardship this time. The construction work of the new dam is in progress. The foundation for two pillars is being laid and the work of the pillars will be completed by May. Water will be stored in the new dam at the same time next year.”