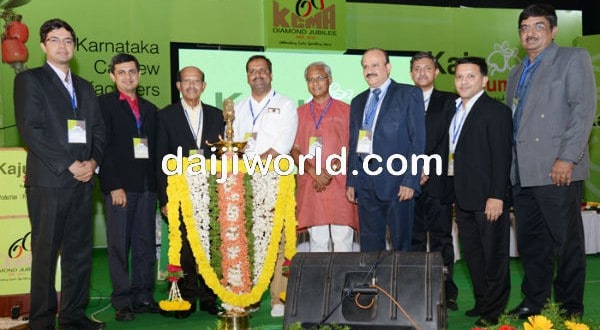 Minister for health and family welfare U T Khadar inaugurated the summit by lighting the lamp.

Walter D’souza, chairman diamond jubilee committee said, “Seven people started this association 60 years ago. In 1955, it had 7 processes under the name Mangaluru cashew association. When we celebrated our golden jublee we had 100 units and today we have 400 units. From a mere 12 crore revenue in 1950, we have now reached over Rs. 2400 crore revenue. Exports have increased from Rs. 8 crore to Rs. 800 crore. We have to empower our farmers. Machinery will be on exhibition at the summit. Experts will present the papers. We are planing a PPP concept in which the government will also play a role.”

U T Khadar said, “It is my pleasure to be present at this function. I like to congratulate all the industries set up in those days. They have helped in the upliftment and development of the poor by providing them employment. Sharing of ideas and network at the summit will ensure the betterment of the cashew industry. The biggest problem is convening the customers. Just as there is promotion of eggs, research on the benefits of cashew should be made known to people so that this industry will flourish.”

J R Lobo MLA Mangaluru south said, “I congratulate Karnataka cashew association for organising this summit here in Mangaluru. Cashew industry also plays an important role in our economy as it contributes to the national export. Undivided Dakshina Kannada district has many cashew industries and they are facing labor problem. In Karnataka, industries are growing but what about the raw material? Cashew cultivation needs to be made economical. The main concern of the summit is the farmers. Now we are importing raw materials. To increase the cultivation all of us have to join together. I wish the summit all the best. May it be a huge success.”