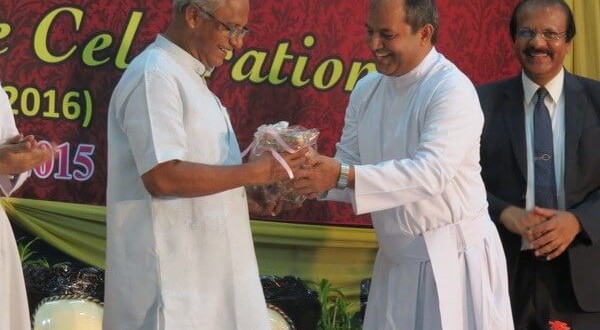 The love and affection of this district for higher education is the same even today. Mangaluru city is known as the city of education and a hub for higher education. In the past, people used to look towards (the then) Madras, Bangalore, Pune and Calcutta even for graduation, but later the trend changed and people started to come to Dakshina Kannada, he said.

MLA J R Lobo congratulated the St Aloysius Institution and said that, this is a great event marking the 50 years of service of the Evening College. St Aloysius is a well-known in the country in the field of education. It is because of three institutions – St Aloysius, St Agnes and Government College that Dakshina Kanna is a century ahead of other parts of Karnataka. The service rendered by missionaries such as Basel Mission, the Jesuits and others in this region has helped this part to develop.

On the occaison, rector Fr Denzil Lobo became the first official donor of the ‘One Rupee Revolution’, an innovative outreach programme by St Aloysius Evening College. Representatives from the students, staff, parents, and alumni/nae joined the rector in donating 1 rupee.

Fr Denzil Lobo emphasised the Jesuit principles of special option for the poor which prompted the novel and noble venture. He also announced the special donation made by noted author Aravind Adiga who instituted a scholarship in the name of Udaya Holla, former attorney general of Karnataka by contributing Rs 10 lac. He said that the amount would be used to support deserving students coming from weaker economic backgrounds.

Dr V Basil Hans compered the event. The vote of thanks was proposed by Dr Donald Lobo, organising secretary of the golden jubilee celebration committee. A colourful cultural extravaganza by the students and alumni/nae brought the programme to a close. Dr Manohar V Serrao, John D’Silva and others were present.