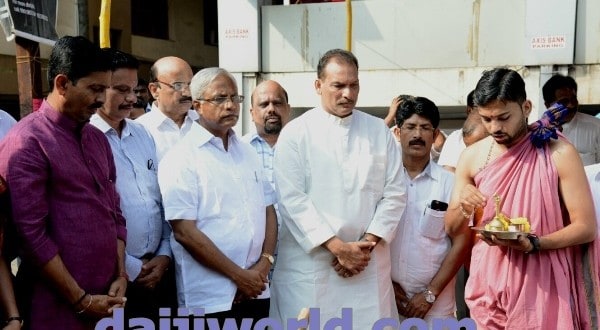 After the inauguration, J R Lobo speaking to the media said, “To develop this road, the State Government has sanctioned Rs 1.94 crore out of Rs 100 Crore second phase grant for the development work. The total amount will be Rs 2.19 crore for the concretization of 312 meter road work. The road will be 14 meters wide including the median. The work on this busy road of the city will be completed in four months. The contractors Gokuldas Bhandarkars have assured to complete the work within the specified time. Most of the roads in the city have been concretized now and this road also will also be concretized soon.”

“One side of the road will be completely closed while the other side will be available for traffic. Proper footpaths will be constructed and we will make sure that no further digging will take place on this road for any purpose. “ He added.

On the same occasion, MLC Ivan D’Souza in his speech said “The Mangaluru city is growing. There are many works pending due to some court orders. We are giving more preference to the footpaths.”
Mayor Mahabala Maarla said that four lane roads will be constructed from Bunts Hostel to PVS circle very soon. “To solve the traffic problems, roads in all the 20-25 circles will be developed. There is no political agenda here. Development is purely for the people. Our intention is to develop our Mangaluru.”

Speaking about the pathetic condition of the Kudroli roads, Mayor said that the issue is in the court and very soon the problem will be solved. He blamed the local people for non co operation.

Prior to the inauguration, there was a verbal exchange between the corporator of Mangaladevi Premanand from BJP and Vinay Raj from the Court ward for putting up a banner and not inviting the Local MP Nalin Kumar Kateel for the event.

“This is a pure official work. This developmental work is for the public. There should not be any kind of political interference. Any work taken up by the corporation does not belong to any political party.” Premanand said.

In another controversy also related to this concretization work, Congress’ own corporator Ashok D K boycotted the inauguration programme saying his photo was not put in the banner. Ashok who is also the MCC Works Committee president exchanged bitter words with fellow corporator Vinay Raj, who had put the big banner with his own photo and other Congress leaders.
Sadly, a programme with good intention was marred by the ‘road’ politics.